On March 10 in the Out of the Past column, I noted the scheduling in 1963 of an up-and-coming comedy act -- the Smothers Brothers. The Wesley Foundation, which was raising money for the operation of its new student center on the campus of what was then called the State College, hired the comedy duo to perform on March 18 at the Arena Building.

I didn't spot a follow-up to that religion-page brief until photographer and fellow blogger Fred Lynch pointed it out to me. It gave a whole new slant to the Smothers' brief stay in Cape Girardeau. 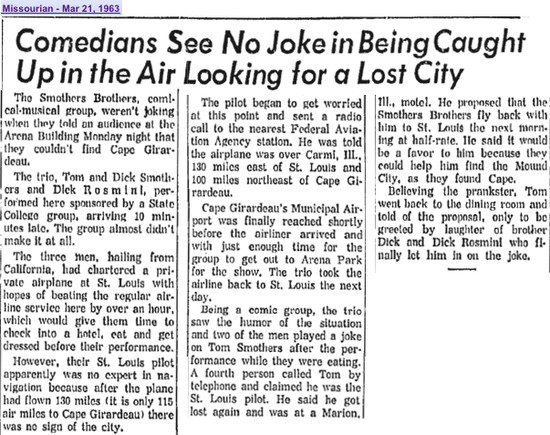 Apparently, the brothers held no ill will toward the city of Cape Girardeau, although it was another 30 years before they returned to the river city.

Their return engagement was in October 1993, when they performed for Southeast Missouri State University's Family Weekend, along with country music act Brooks and Dunn.

On Oct. 7, 1993, the Missourian published a story about the brothers, written by Sam Blackwell. 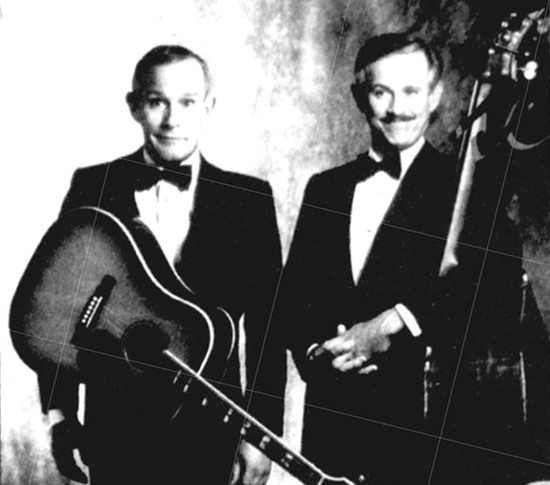 The funny thing about born loser/ clown-faced comedian Tom Smothers is how reflective and ungoofy he really is.

"I'm like a majority of comics. Put three comics together, it's a very serious conversation - not funny," he said in a phone interview from Endicott, N.Y.

Smothers, traveling with his wife and infant son, was in New York to perform and to play in one of his beloved pro-am golf tournaments.

At 8 p.m. Saturday, he and brother Dick -- known jointly for the past 30-some years as the Smothers Brothers -- will perform at the Show Me Center, capping Family Weekend at Southeast Missouri State University.

The annual Family Weekend, which this year is themed "A Celebration of Laughter," begins at 8 p.m. Friday with a Show Me Center concert by Grammy-winning country artists Brooks and Dunn.

Among the songs the duo will perform will be their hit singles "Boot Scootin' Boogie," "Brand New Man," "My Next Broken Heart" and "Neon Moon."

Watching comedians perform, usually you're seeing them working things out in their lives, Smothers says. "We generally look at life as a very serious matter. Working on stage is basically therapy."

On stage, Tom Smothers plays the childish buffoon to his brother's impatiently sensible straight man, but in reality Tom's the older brother who takes care of business. "Dick probably has more fun," he said.

The seeds of the Smothers Brothers' therapeutic humor perhaps were sewn when their West Pointer father was captured during World War II. He was in the Bataan Death March and died a prisoner of war in 1945. They were raised by their mother's side of the family in Southern California.

That's when Tom developed what he calls his "loser, victim personality. We changed schools a lot and it was a defense mechanism."

A musician in a dance band in high school, Tom also discovered early on his talent for making people laugh. "Whenever I was in front of a class or a group of people, things started happening."

In college he started learning card stunts. "I seemed to be able to command some attention," he recalled.

When he and Dick put their act together, they established a basic dynamic that has continued. "I always talked," Tom said. "Dicky would just stand there and say, `No, that's not true.'"

The schtick landed them on the early "Tonight Show" with Jack Paar, and within two years they were stars.

Early audiences thought Tom and the clown he played were synonymous, and for good reason. "Twenty-four hours a day I was doing it. I was pretty one-dimensional," he said.

In the late 1960s, the Smothers Brothers became the hottest thing on TV, introducing audiences to such performers as Steve Martin, Mason Williams, and Rob Reiner.

They took all kinds of chances and potshots at government policies - especially U.S. involvement in the Vietnam War. All that came crashing down when CBS canceled their show because they refused to back off.

They took a break of some years, both doing some theater, and reunited as the Smothers Brothers in 1981. In 1988, they did a 20th anniversary TV show, and 18 one-hour specials for CBS have followed.

But their career as a comedy team during the past decade has revolved around concert dates at art centers and with symphonies, and performances in Las Vegas and Atlantic City.

While his brother Dick has had avid interests in race-car driving and currently tennis, Tom has devoted his off-stage self to golf and a winery. His Smothers Remick Ridge Winery in California's Napa Valley produces chardonnay, cabernet and merlot wines from about 30 acres of grapes.

"It pays for itself, but it's not profitable," he said. "I still have to be funny."

His career in show business has consisted of "big-time transitions," Smothers said. "I'm 56 years old, and this is the best part of my life, the most enjoyable part."

Part of that is an effect of becoming a father again, he admits.

"The world isn't going to end, things do continue. I'm more relaxed about life and I enjoy being a comedian. It doesn't drain me."

The brothers still lampoon politicians in their act, but audiences have become quite a bit more cynical since the '60s, Tom says.

"It's very difficult to do political satire now. We're all so wise."

In the current atmosphere of distrust, political humor almost has become redundant, he said. "Most of it's done for us by the very objects we ridicule. If it was still effective, I'd still be doing it."

He's aware that no matter what he does professionally, he'll always be known as half of one of show business' great comedy teams.

"We're the last of the comedy teams," Smothers pointed out. "There aren't any more. It's all standup."

He thinks the reason is the difficulty of working with someone else rather than going it alone. "It's hard. We used to carry a lot of baggage around," Tom said of his relationship with his brother. "Now, when we irritate each other we forget about it as fast as we can."

"..It's a complicated dance you do with someone else," he said.