Cape had a shirt factory

Long before Ely-Walker opened a factory in Illmo, that St. Louis manufacturer operated a shirt factory in Cape Girardeau. Its history here, however, was much rockier than its tenure at Illmo.

Efforts to attract the manufacturing plant to this river town began in the spring of 1903, when the Commercial Club sent a committee to St. Louis to negotiate with Ely-Walker's management. The club, which later became the Cape Girardeau Chamber of Commerce, offered the company "a building on Independence Street free for two years," according to the Cape Girardeau Democrat newspaper. At the end of that time period, Ely-Walker would be allowed to buy the structure at cost or lease it.

The building in question was at 221 Independence and originally housed the John W. Warren and Martin A. Bierwirth woolen mill. It was a large, three-story brick building that sat on the south side of Independence between the Bee Store and the J.F. Vogelsanger home.

Efforts to find a photograph of the building have been unsuccessful, but I did find a rather disappointing image of it published in a 1934 edition. It was supplied by Mrs. Nell Davis, who was employed at the factory: 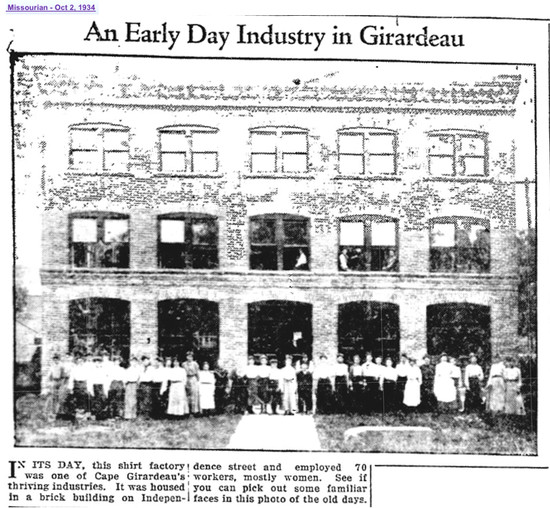 Ely-Walker accepted the Commercial Club's generous offer, signing an agreement to open a factory here on Sept. 1, 1903, and to employ 100 women and girls at that time. Eventually, it was hoped the employment would rise to 150 or 200 people. Not only was Ely-Walker offered free quarters for the first two years it was in Cape Girardeau, it was also given free electricity for that period. After the first two years, the company would pay a rent of $900 a year.

Hugh Logan came here from St. Louis to open the plant and then manage it. He brought with him an expert cutter, who employed William Barenkamp as his assistant. Julia Jenkins, also of St. Louis, was the forelady.

In 1905, it's free ride having expired, the firm complained that it wasn't prospering here, because it wasn't able to attract the workers needed. It asked for a reduction of the rent it had agreed to pay. Eventually, the rent was lowered to $600 a year.

Possibly as an incentive to attract employees, Ely-Walker opened a girls' dormitory in September 1905 on the second floor of the Bee Store, immediately to its east. The 12-room dorm boasted electric lights and steam heat, and a large bathroom was provided. Mrs. Francis Anderson served as its matron.

In September 1906, the shirt factory encountered new competition for employees, when the Roberts, Johnson and Rand shoe factory opened on North Main Street.

In an effort to attract workers, Ely-Walker took out a full-page ad in The Daily Republican on March 30, 1907. 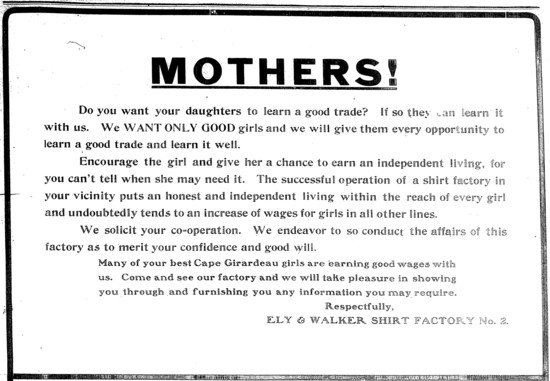 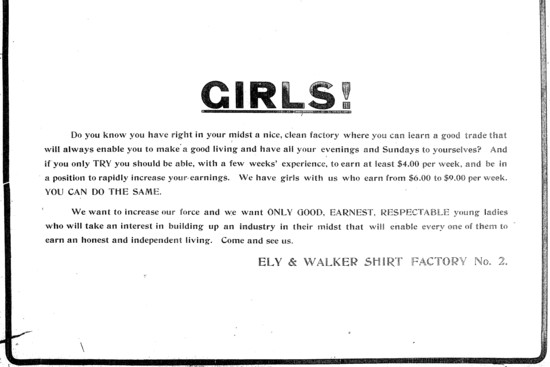 Whether the appeal for "good girls" was successful isn't clear, but by December of the following year Ely-Walker quietly began packing its factory. In a story that pulled no punches, The Republican published the news of the closure on Jan. 3, 1908:

In June 1909, Company K of the Missouri National Guard acquired the former shirt factory building for use as its armory. The spacious building supplied ample room for "a fine drill room, a gymnasium, rooms for officers and non-commissioned officers, and convenient lockers... A series of social hops is contemplated in the big room during the coming winter."

By 1911, the Company K boys were keeping company with Alvin Cotner and Glenn Hope, who had opened a garage and automobile agency on the first floor of the building.

The end of the building that began as a woolen mill in the 1800s came in a spectacular fire in 1913: 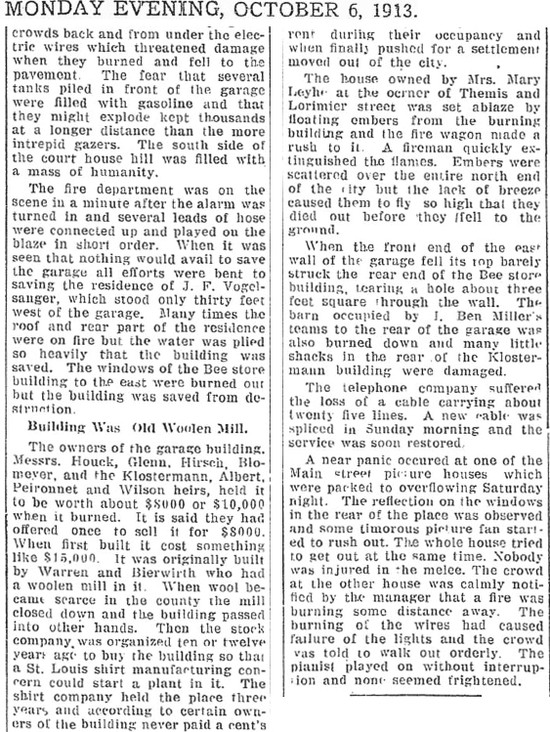