There's big doin's in Cape Girardeau this week, and a lot of it is centered around the historic Oliver-Leming House, the home of the Missouri State Flag, at 740 North St. March 22 marks the 100th anniversary of the signing of legislation by  Gov. Elliot Woolfolk Major in 1913, adopting the flag designed by Marie Watkins Oliver (shown below). 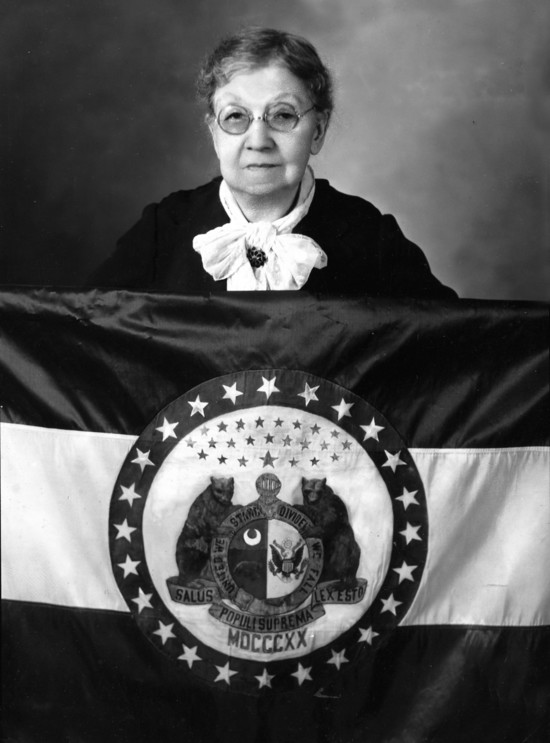 A ceremony will mark that anniversary tomorrow (March 22) at Centenary United Methodist Church's Family Life Center at 1:30 p.m. Refreshments will be served. Immediately following the ceremony, the Regional History Fair will open at the center.

Public tours of the Oliver-Leming home will be available from 1 to 4 p.m. March 23.

An article published in the Missourian's Bicentennial Edition, July 4, 1976, tells the story of the flag.

HISTORY OF MISSOURI FLAG
"Cape Girardeau, Home of the Missouri State Flag." By action of the City Council on Jan. 22, 1975, this became the official slogan of the city that has rightfully claimed the title since 1913.

It was in the stately Oliver home at 740 North St., built for Sen. R.B. Oliver in 1898, that the flag was designed and hand sewn. J.B. Legg of St. Louis was architect for the fine residence, with John Madden of Cairo, Ill., as contractor, Messrs. Biggs and Burton as painters, and a Mr. Boyle as plumber.

In the accompanying account of the creation of Missouri's state flag, by the late Allen L. Oliver, who died Feb. 10, 1970, refers to Sen. Arthur L. Oliver of Caruthersville and Rep. Charles C. Oliver of Cape Girardeau County. Both were nephews of Sen. R.B. Oliver.

Allan L. Oliver, who was an attorney and a civic leader in Cape Girardeau more than 60 years, presented the accompanying account of the flag's making at a meeting of the Cape County Bar Association at the opening session at Common Pleas Court on Nov. 23, 1953, during which new flags were presented the court.

Miss Mary Kochtitsky, to whom he refers, called herself in later years Mrs. Oliver's "amanuensis" in the flag project; she was the daughter of Otto Kochtitsky, father of drainage work in Southeast Missouri; she died Jan. 20, 1973. Mrs. S.D. McFarland was the wife of the manager of the International Shoe Co. plant here.

Mr. Oliver presented the delicate fabric of the original flag to Secretary of State Warren E. Hearnes in an impressive ceremony in the House of Representatives at Jefferson City on Flag Day, June 14, 1961.

************
The State of Missouri has had an official state flag  since the 22nd day of March 1913. It was conceived, designed and created by my mother, Mrs. Marie Elizabeth Watkins Oliver, at the stately Oliver home at 740 North St., here. By common consent she kept it at her home until her death in October 1944.

In 1908, the Daughters of the American Revolution appointed a committee to initiate a move to prepare a design for a state flag and if possible to secure the passage of a bill making it the official flag of the state.

My mother, a member of that committee, immediately began a study, corresponded with all of the other states, and after months of such study and research designed this flag. She called to her assistance Miss Mary Kochtitsky, then of Cape Girardeau, an artist of much skill and taste, to assist her in the execution and painting of the design.

Then my father, former Sen. Robert Burett Oliver, the husband of the designer, prepared and sent to Sen. Arthur L. Oliver of Carutherswville a draft of a bill and he introduced it in the Senate on March 17, 1909. Another bill was introduced by a Dr. (Numa R.) Holcomb in the House of Representatives for the adoption of a different flag.

Sen. Oliver, after conferring with my mother as to the meaning and interpretation of the design of the flag and what it stood for, publicly stated:

"The Constitution of the state provides that the emblems and devices of the Great Seal of the State as heretofore prescribed by law, shall not be subject to change. The coat-of-arms is a part of the great seal of the state and unquestionably should be made a prominent feature of a state flag. The Dr. Holcomb design for a state flag introduced in the House is objectionable in that it does not contain the coat-of-arms, and because the general design is similar to the national flag.

"It is liable to cause a confusion in the field and elsewhere. There is nothing in the Holcomb design that indicates state sovereignty or the relation of the state to the Union, except the abbreviation of Missouri by the use of the letters 'Mo.'

"The design I offer embraces all the colors of the national flag -- red, white and blue -- which recognizes that the State of Missouri is a parcel of the federal government.

"At the same time it represents the state as possessing a local independence, a local self-government, but in perfect harmony with the great national compact, as shown by the mingling of the colors, red, white and blue, on every side of it.

"The coat-of-arms of the state is in the center of the national colors and represents Missouri as she is -- the geographical center of the nation. The (24) stars on the blue band encircling the coat-of-arms signifies that Missouri was the twenty-fourth state admitted into the Union of States. The blue in the flag signifies vigilance, permanency and justice; the red, valor; and the white, purity.

"The crescent on the shield, in heraldry, represents the second son, so our crescent on this shield denotes that Missouri was the second state (Louisiana being the first) formed of the territory of the great Louisiana Purchase. The helmet on the coat-of-arms indicates enterprise, and hardiness and signifies state sovereignty.

"The great grizzly bears are peculiarly appropriate to a state traversed by the Missouri River, and in our coat-of-arms and on this flag these bears signify the size of the state, the strength of the state and the courage of her people, and further, the represent protection to the state from invasion from every source.

"This design for a state flag represents that while we, as a state are independent and support ourselves as a state, we are also in perfect harmony with and constitute an important part in the support and maintenance of the national government. The motto shows that the will of the people is the supreme law of the state. This flag, therefore, stands for something."

In 1911 the "Oliver Flag Bill," as it was known, was again introduced in the Senate by Arthur L. Oliver and was approved by a vote of 23 to 2. During that 1911 session of the General Assembly, the State Capitol burned and that flag, being in the Capitol, was likewise destroyed in that fire.

Mrs. Oliver again set to work, and, having called to her assistance Mrs. S.D. MacFarland, then residing in Cape Girardeau, made the present flag. She sent it to Sen. Oliver at Jefferson City to enable the members of the General Assembly to see its effect and its beautiful design and blending of colors. In the confusion and delay incident to the fire, the bill again failed to pass in the House of Representatives.

In the meantime the Daughters of the American Revolution and the Colonial Dames of Missouri each formally and cordially ratified and approved the design of this flag and urged the General Assembly to adopt it and make it the official flag of the state.

In 1913 Charles C. Oliver, representative of Cape Girardeau County in the General Assembly, introduced the "Oliver Flag Bill" in the House on Jan. 21, 1913. It met with almost unanimous approval by the members of the House and was adopted on March 7, reported to the Senate and there, for the third time, met with favorable action of that body. The bill was signed and approved by the governor on March 22, 1913, since which date it has been the official flag of Missouri.

When Mrs. Oliver transmitted the flag to Sen. Arthur L. Oliver, she wrote him and gave him the interpretation and meaning which was later given by him to the public press. It bespeaks patriotism to the state as well as patriotism to the national government.

The Oliver-Leming House earned a spot on the National Register of Historic Places in 1980. At the time, only one other structure in Cape Girardeau -- the Glenn House -- was on the register.

The nomination for the National Register notes that Sen. Oliver was "already a prominent attorney and civil servant by the time he moved from Jackson... to nearby Cape Girardeau on Oct. 2, 1896. In the new locale, he purchased an expansive tract of land on North Street, intending to build a new home on a sizable parcel and profitably subdivide the periphery of the property for residential development." 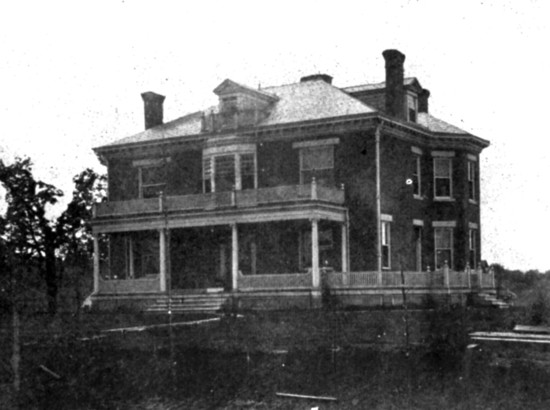 (This photos was taken before extensive alterations were made to the home in 1915.)

The Oliver family retained ownership of the house until 1947, when it was sold to lumber dealer M.E. Leming Jr., who acquired it as a birthday gift for his wife, Thelma Coleman Leming. It is now owned by Bert and Mary Ann Kellerman, who have done extensive restoration work to the house.

Here are obituaries for both R.B. and Marie Oliver. 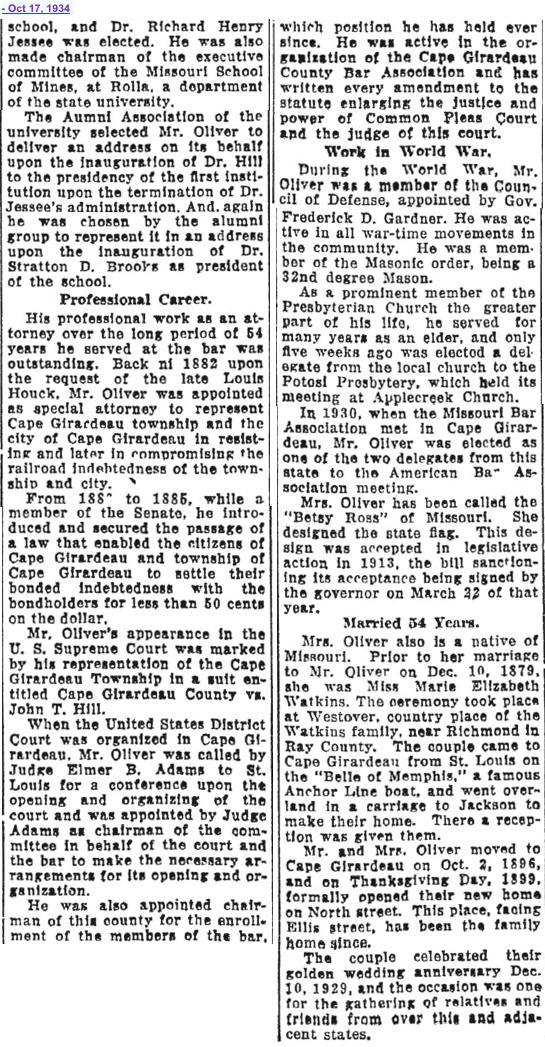