George Talley lost his revolver in 1915, along with the holster he wore it in.

While this bit of bad luck may not seem too serious, one should consider that Mr. Talley lost his "revolver, holster and strap" while in the performance of his duties as a Cape Girardeau police officer. It seems, he mislaid it. A front-page story, along with the small want ad above, told the amusing tale of Officer Talley's misfortune. The story also referred to a joke played on another unidentified policeman:

The mystery of the lost gun must remain unsolved, unless a reader -- perhaps a relative -- comes forward with an ending to the tale. I was unable to find anything else about the missing weapon in the files of the Missourian.

I did find a note in 1919 that told the news of the Talley family's return to Cape Girardeau from East St. Louis, Ill. Talley had moved there the previous year to take a job, but found the bigger city not to his liking. He moved his family back to the Cape and returned to "his old job at the shoe factory."

The only other item I found about the former police officer was a small obituary: 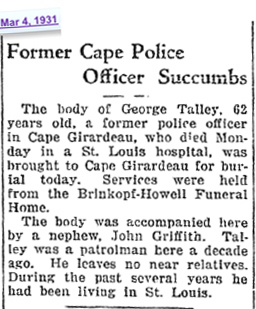