Another look at the Fulton Flash

Years ago, I heard a story about an athlete who trained for the Olympics here in Cape Girardeau. The story went that he practiced tossing the shot put on one of the streets near Southeast Missouri State University, then the Normal School.

While trying (unsuccessfully) to track down that tale, I did find a couple of interesting stories about Helen Stephens.

You've met the "Fulton Flash" before in one of my previous blogs: http://www.semissourian.com/blogs/fromthemorgue/entry/48911/

Stephens won gold medals in the 1936 Olympics in Berlin in the 100-meter dash and the 400-meter relay. That was the same Olympics that saw Jesse Owens take home four golds. In 1937, Stephens ran exhibition races and tossed the shot and discus during the MIAA Track and Field Meet in Cape Girardeau.

Online biographies note that after the Berlin games, Stephens played professional baseball, softball and basketball, even founding and owning her own semi-pro women's hoops team, "The Helen Stephens Olympic Co-Eds." During World War II, she served with the Marines.

Those same biographies, however, failed to note that after the war, she was hired by Dorsa Dresses, Inc., of St. Louis as its recreational director. Dorsa had dress manufacturing plants in Cape Girardeau and in Jackson. Stephens spent two days at the county seat factory in November 1945 organizing a recreational club for employees and was back in Cape Girardeau later that month to do the same here. She also took time from her busy schedule to speak to the students at Jackson High School. 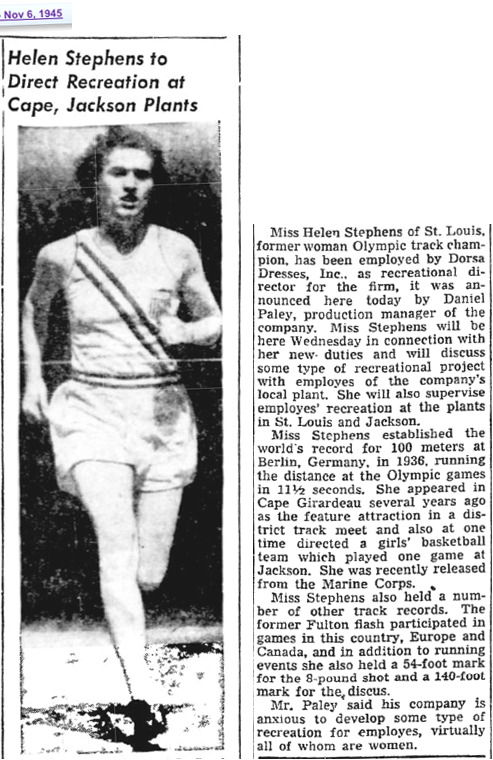 In addition to her employment with Dorsa, Stephens worked for 26 years with the Research Division of the U.S. Aeronautical Chart and Information Service (later known as the Defense Mapping Agency Aerospace Center) in St. Louis.

After retiring, she returned to her first love of running. Stephens became an assistant coach at William Woods College. She made at least one more trip to Cape Girardeau in 1980, this time as a coach. While here, she spoke of her Olympic experience and shared her opinions about the unpopular boycott of the 1980 Summer Olympic Games: 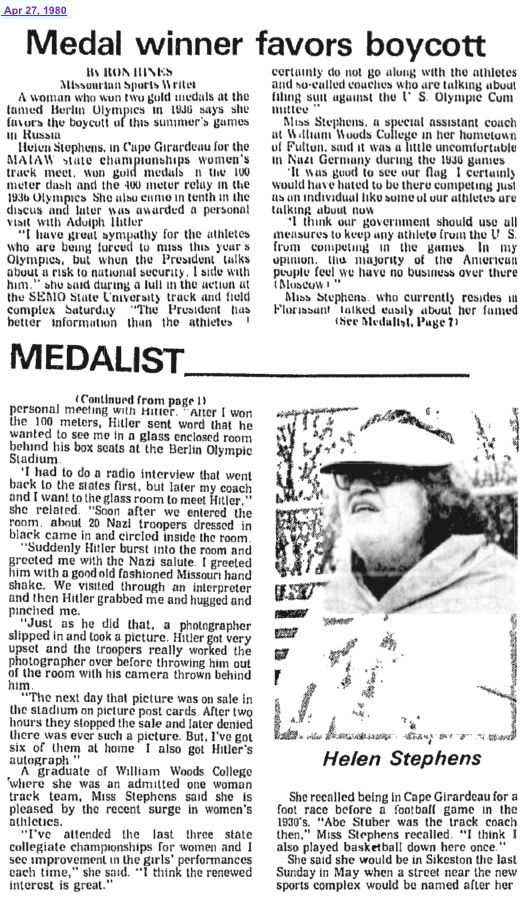