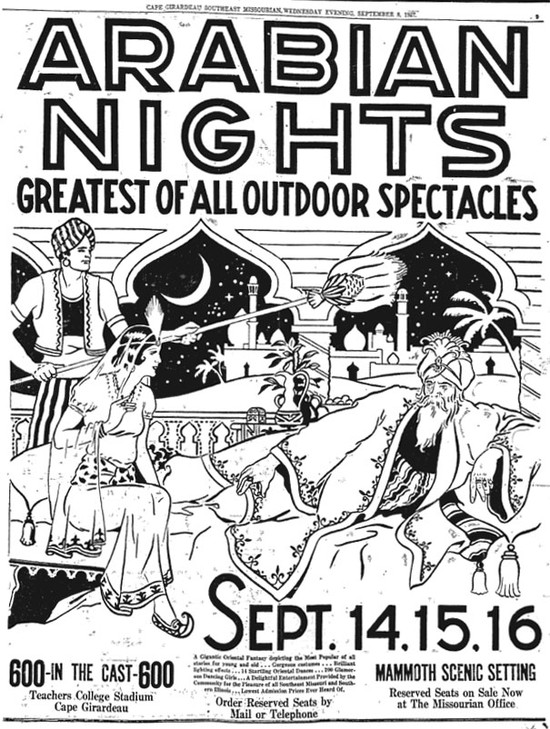 On three cool, clear nights in mid-September 1937, Cape Girardeans thrilled to the tales of the "Arabian Nights."

Sponsored by the Southeast Missourian newspaper, three stories of the children's classic were staged under the stars in Houck Stadium. Residents from Cape and the surrounding towns crowded the grandstand of the football stadium to see over 500 Girardeans play the parts of Scheherazade, Schah-Riar, Schah-Zenan and so many others on a stage nearly 300 feet long.

The Missourian announced the show on Aug. 6: "'Arabian Nights,' the best known of all children's stories, and beloved as well by adults, will be presented in a great spectacle in the Houck Stadium the week of Sept. 14, by the Rogers Producing Company of Fostoria, Ohio..." It wasn't the first outdoor spectacle presented here, but the article promised, "It will be by far the largest and most expensive entertainment project ever attempted in Cape Girardeau."

(In 1940, the Rogers company produced a silent film in Cape Girardeau. You can read about it here: Cape's own movie)

About a week after the announcement, John W. Judd, production manager for Rogers Producing, arrived in Cape Girardeau to oversee the staging of "the great spectacle." He offered this synopsis of the production: 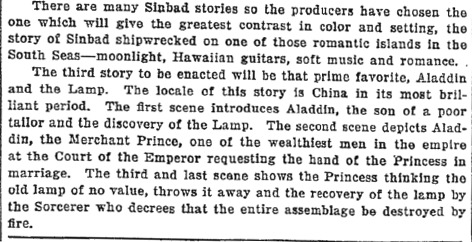 Professor W.A. Buckner, a member of the State College faculty, hired on as Judd's assistant. Buckner had done similar work before coming to Cape Girardeau,

Those desiring to display their theatrical skills were welcomed by Judd to the gymnasium of the old Central High School, where all rehearsals were conducted until the stage was constructed at Houck.

And what a stage it was: "Erected in a semi-oval shape under the personal direction of John W. Judd..., who revised the original layout to suit conditions, the setting is located on the north side of the field directly opposite the stadium seats..."

"The centerpiece in the middle (of the set) is more than 30 feet in height and about midway up is a balcony, which will hold 30 or more people, with steps leading to it from either side. Some of the production takes part on the balcony, with the larger groups appearing on a natural stage immediately in front of it and along the front of the entire set..."

Applying makeup were Martha Shea and members of the Black Mask Dramatic Club of the college. Costumes were provided by the Rogers company, but were handled during the production by members of the Parent-Teachers Association, with Mrs. W.A. Buckner and Mrs. Leo Wagner in charge.

The Missourian published stories about "Arabian Nights" almost daily until the final "curtain call." On Sept. 9, it produced a special section devoted to the show, which included photos of the various players and a cast list. Here are just a few of the pictures published: 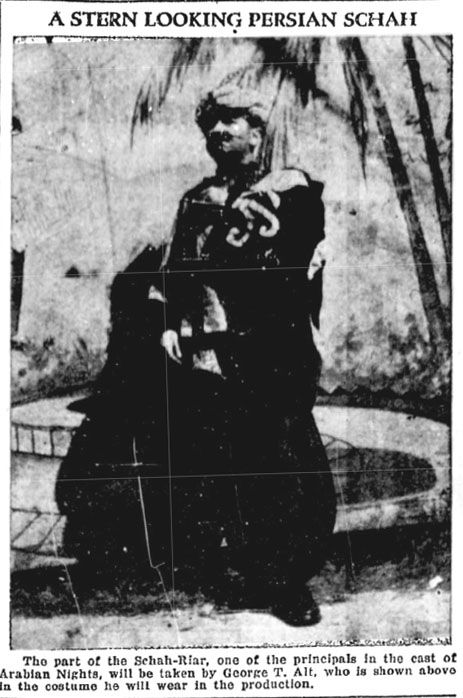 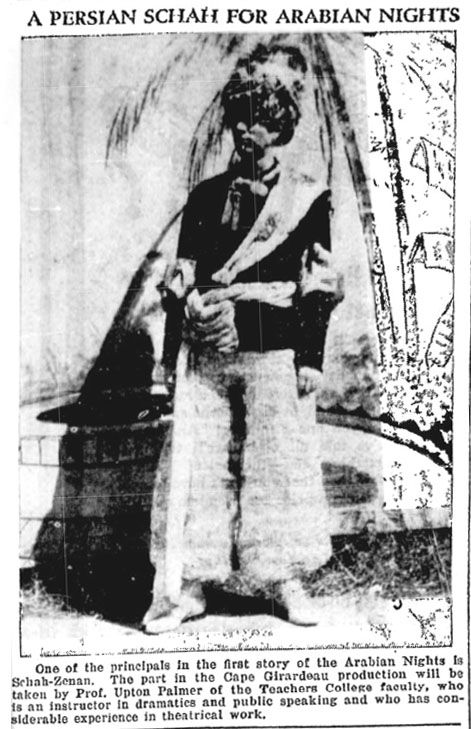 Here is the cast of "Arabian Nights." Note, Cape Girardeau attorney Rush H. Limbaugh and Mrs. E.A. Reissaus narrated the stories, standing on either side of the stage. 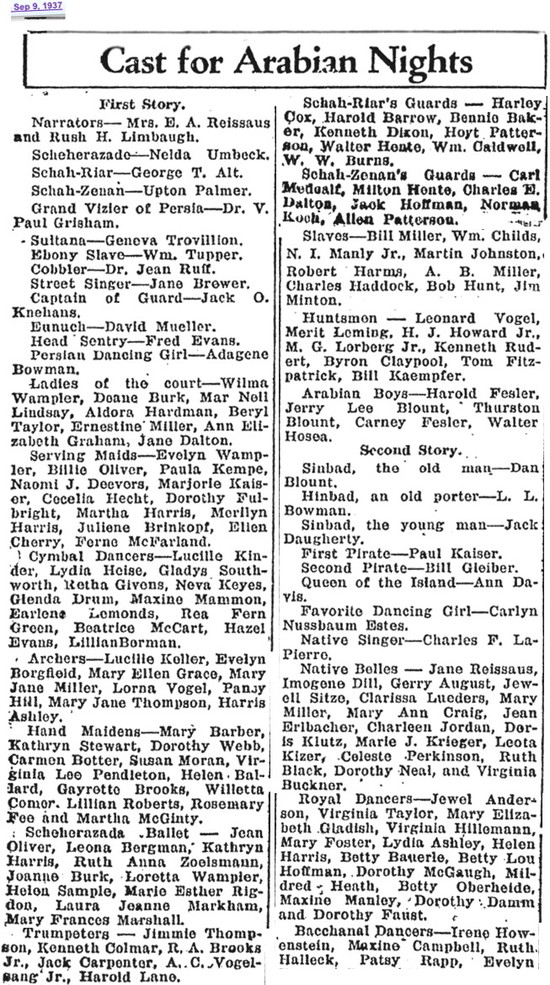 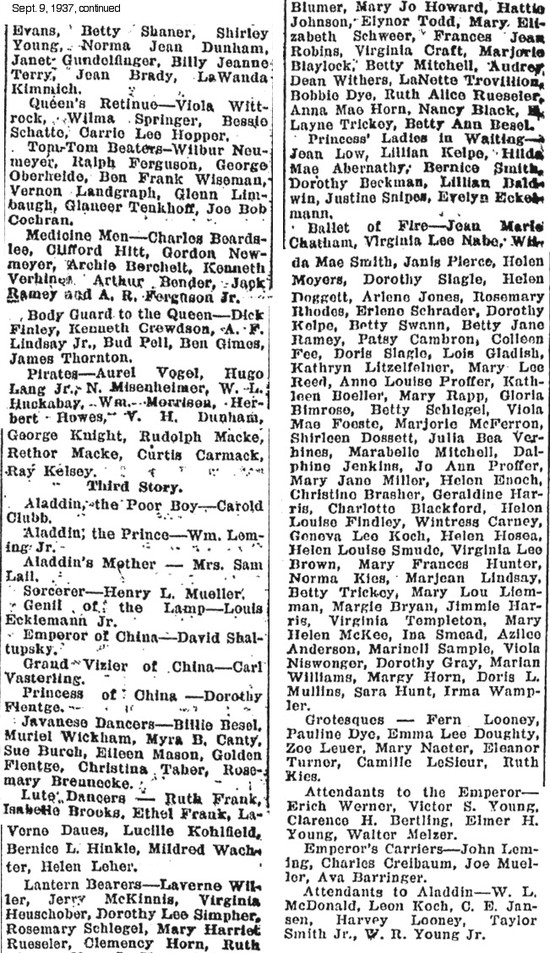 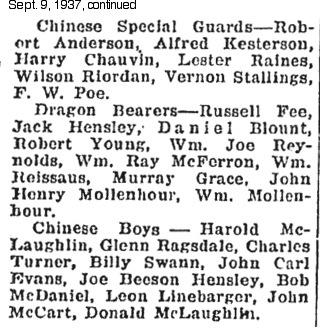 Left off the cast list were these names, published Sept. 14:

I've been unable to find any attendance figures for the production. At the time, Houck Stadium could seat about 6,000. The grandstand was apparently filled the first two nights, but cool weather reduced attendance somewhat on closing night.

Rogers Producing Co., which was started in 1903 by John B. Rogers in Fostoria, was back in Cape Girardeau again in 1956, when it produced "The Legend of Cape Girardeau" for the town's 150th birthday. Again, Houck Stadium hosted the production, and over 500 persons made up the cast for the Sesquicentennial "historical panorama."