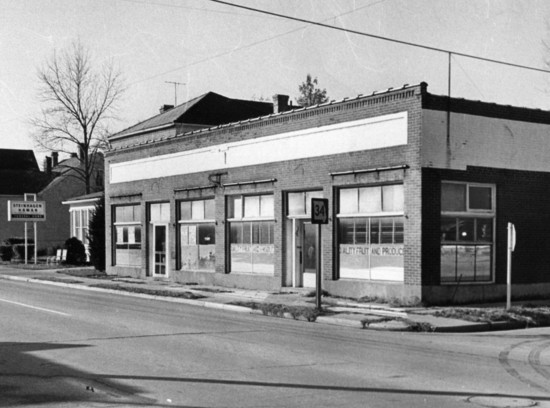 Sugar Creek Creamery will be remembered by older residents of this area, while recent arrivals to town will be hard-pressed to place the above photo. It was taken in 1968, when National Food Stores announced its intention to tear down the creamery, as well as every other building along the west side of Sprigg Street between Merriwether and William streets, including its own grocery store. Replacing the block of older buildings was another National store building, which now houses Fred's and Save-a-Lot.

The creamery made its Cape Girardeau debut in July 1929, when Sugar Creek Creamery Co., headquartered in Danville, Ill., purchased the Golden Grain Butter Co., 714 William St. Golden Grain was founded in 1915 by T.C. Eugas. He remained with the business, along with George Meyer, after it became Sugar Creek.

The Danville company had assets of $1,800,000, with butter plants operating at Danville and Pana, Ill.; Louisville, Ky.; Evansville, Ind., and Bristol, S.D. In addition, it had a butter and sweet cream plant at Marshfield, Mo., and condenseries at Marshall and Watseka, Ill. It had sales branches in Pittsburgh, Pa., and in Florida. Its cream-buying stations were located throughout Southeast Missouri.

In making the announcement of the purchase here, H.C. Horneman, founder and president of Sugar Creek, said a new plant, capable of producing 3,500,000 pounds of butter annually, would be constructed.

Horneman praised the area: "I never saw better prospects for dairying in any county in the country than here in Cape Girardeau County. I have made a number of visits here, covering a period of years, and only after thorough investigation were we convinced that the company should come to Cape Girardeau."

The company's plans to build a new plant never materialized, possibly due to the sale of the company to National Dairy Products Corp. in 1930.

In March 1931, it moved into the former Reed Motor Co. building at the southwest corner of Sprigg and Merriwether. After improvements were made to the structure and installation of machinery, it was projected the new plant would double the capacity of the local Sugar Creek operation to more than 30,000 pounds per week.

For another 30 years, Sugar Creek continued to do business in Cape Girardeau, buying cream from area dairy farmers and producing "a million pounds of butter annually." Clarence A. Loos, manager, announced its closure in 1962: 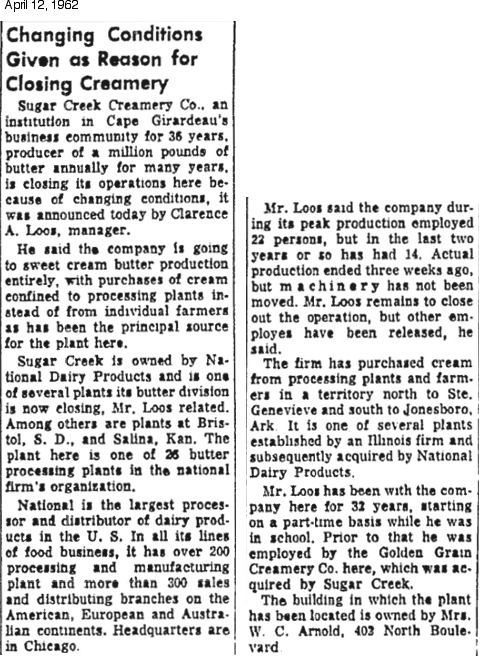