Fred Lynch recently posted a blog detailing the history of the old building that once housed Saint Francis Hospital at the northwest corner of Sprigg and William streets -- http://www.semissourian.com/blogs/flynch/entry/47027/

In later years, it was home to St. Mary's High School.

For a brief period, in between its time as a hospital and a school, the massive building served as the Lighthall Indian Sanitarium. 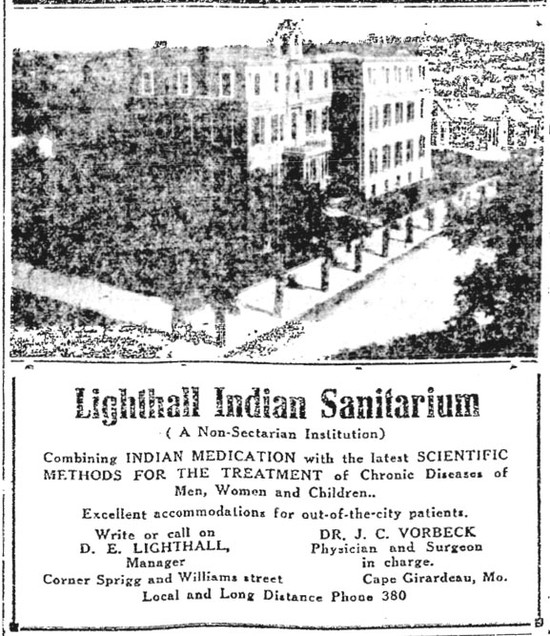 This advertisement apparently began running sporadically in The Southeast Missourian in February 1919. It made me curious about the men associated with the sanitarium.

The manager was Docstader Earl Lighthall. Missourian archives yielded very little about the man prior to 1919, and he apparently left Cape Girardeau that same year. His name does not appear in the 1920 City Directory.

The earliest record I have been able to find of him in Cape Girardeau was Sept. 12, 1918, when he registered for military service. His registration card, found on Ancestry.com -- http://www.ancestry.com/ -- shows that he was born Jan. 10, 1875, in the United States. Although he listed no employer "at present," the card indicates he was a "cowboy and public lecturer."

An article published Feb. 19, 1919, shows that Lighthall, "the Indian medicine man," was arrested on a charge of practicing medicine without a license. According to the story, a similar charge had be made against him earlier. A check with the Cape Girardeau County Archive Center revealed he was found not guilty on the first charge, while the second was dismissed.

On July 12, 1919, Lighthall married a local girl, Elsie Elizabeth Bosse, aged 16. They were married by the Rev. E.A. Jordan, pastor of the Christian Church, at the home of Henry A. Bosse in Cape Girardeau. Lighthall's new bride had been a nurse in the sanitarium. It was his second marriage.

By September 1919, Dr. J.C. Vorbeck, the physician and surgeon associated with the sanitarium, had taken over its management, and the name was changed to Vorbeck's Sanitarium. Lighthall became its "field agent" and probably left town shortly afterward.

Vorbeck is also an interesting subject.

He was the son of Joseph Vorbeck, who died in 1898,  and Cape Girardeau's first female physician, Dr. Margaret A. Blaich Vorbeck. A small ad in The Daily Republican newspaper on Jan. 25, 1904, shows that she had "opened offices temporarily at 629 Themis St." for the treatment of all "chronic diseases of lungs, nose and throat. Nervous diseases of women and children a specialty." 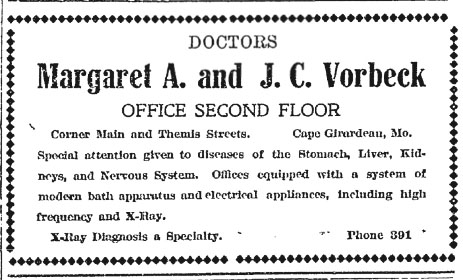 Apparently, Margaret returned to St. Louis about the same time J.C. Vorbeck became associated with the Lighthall Sanitarium. He remained in Cape Girardeau until 1921, when he, too, moved to St. Louis.

Margaret Vorbeck died at her home there on Aug. 28, 1924. Her obituary appeared in the next day's Missourian: 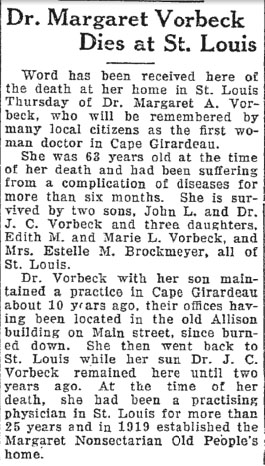 The last Missourian article I can find about Dr. J.C. Vorbeck was published Jan. 13, 1932: 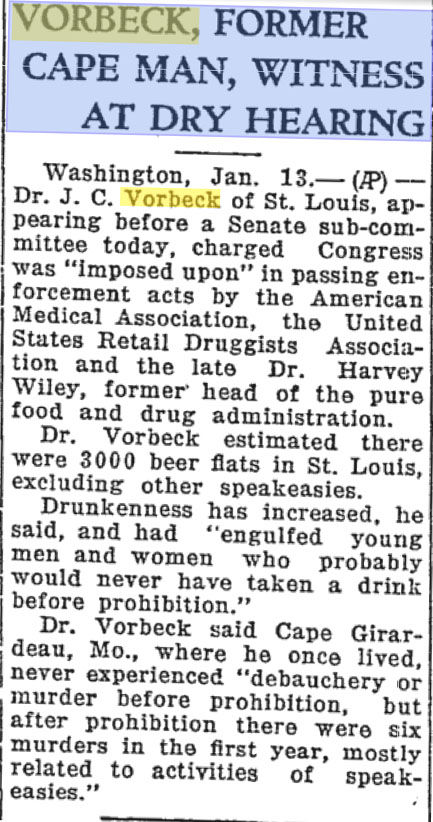