The Normal before the fire 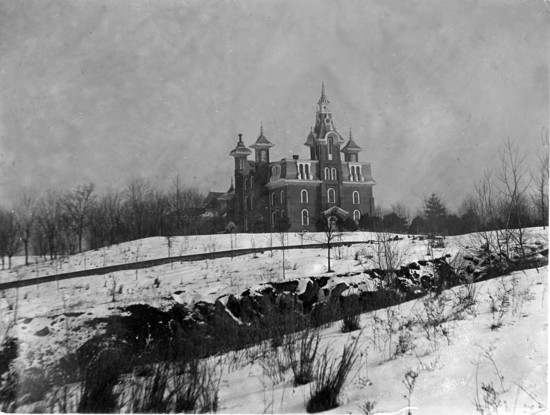 In a recent blog, I featured the story of the burning of the Third District Normal School in 1902. Someone then posted a comment, asking whether any photos existed of the building before the fire. The answer is "yes," and three views of the big structure are included here.

I was unable to find a good description of the school and what it contained, but I did find a story written by Judith Ann Crow and published in the Missourian on Nov. 5, 1965. It gives information about its location and construction. Here is an excerpt from that article:

Location of the Normal School at Cape Girardeau having been established, there remained the task of selecting a site; three of the city's four Civil War forts were offered.

Fort A, on the bluff at the east end of Bellevue, overlooking the river, contained only an acre and a half and was thus deemed too small...

Andrew Giboney, owner of Fort D, south of the city on the river, offered the fort with 10 acres surrounding it free, but the board, wanting a high elevation, rejected the site as being too low.

Fulfilling both requirements of height and space was Fort B, commanding the city from the northwest. Joseph Lansmann owned the 10 1/2 acres sweeping down from the highest point were the arsenal and rampart stood, just as they had been at the end of the war eight years before. He offered five acres of the site as a gift, and the other 5 1/2 acres for $1,000. This, then, was the site chosen by the board for the Third District Normal School.

Having advertised for plans for the building to house the new school, the Board of Regents met in St. Louis on Jan. 14, 1874, and accepted the plans drawn by a St. Louis architect, C.B. Clarke. When Mr. Clarke had submitted specifications for the construction, the board had set $39,000 as the maximum to be spent; however, all bids opened in Jefferson City on March 25 were above that figure and were rejected. The board then made adjustments to the plans to bring the cost within the prescribed limit, and the building committee, Jacob Burrough, Lucius H. Cheney, and Otto Buehrmann, proceeded to contract with William F. Gray for construction.

When Mr. Gray was looking about for material to put into the building, it was suggested that he begin with what was already at hand, and this he did. The arsenal stood in the center of the flat top of the hill, and the rampart made a large semicircle around it to the west, the long trench just outside the rampart.

This rampart was built of brick taken from Joseph Lansmann's kiln down by St. Vincent's College and clay dug right on the spot for the intrenchment; Mr. Gray tore down the rampart and used the bricks as long as they lasted, then he took clay from the hill and burnt the rest of the bricks in a kiln constructed right there. The building was completed in the spring of 1875 and put into use almost immediately.

Thus the hill itself furnished him the material for the building, which stood until April 1902, when it burned to the ground... 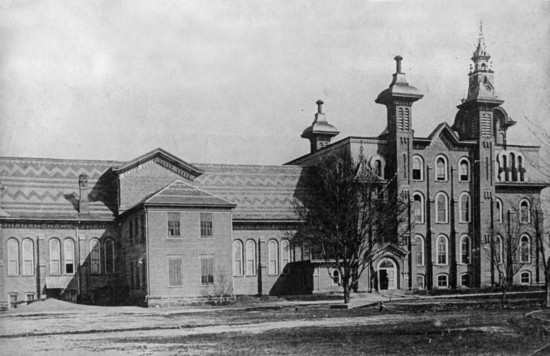 This is the west side of the building.

And here is another view of the front of the school, clearly reflecting Mark Twain's description of the edifice in "Life on the Mississippi." 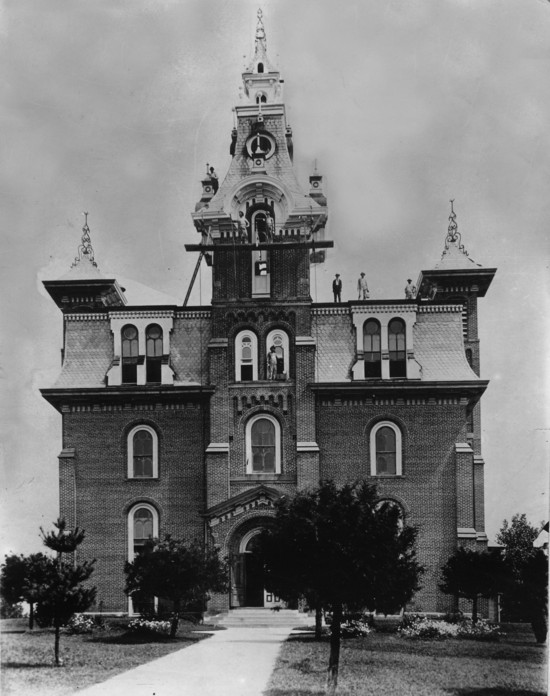