I'm frequently asked by customers to supply old photographs of Cape Girardeau. One image most requested is the building at the northeast corner of Broadway and Sprigg Street. That's now a lot east of the Last Call bar.

Despite my best efforts, I've yet to find a good photograph of that location. The closest I have come is this image from 1947, taken from the south side of the Broadway about a half-block west of Sprigg: 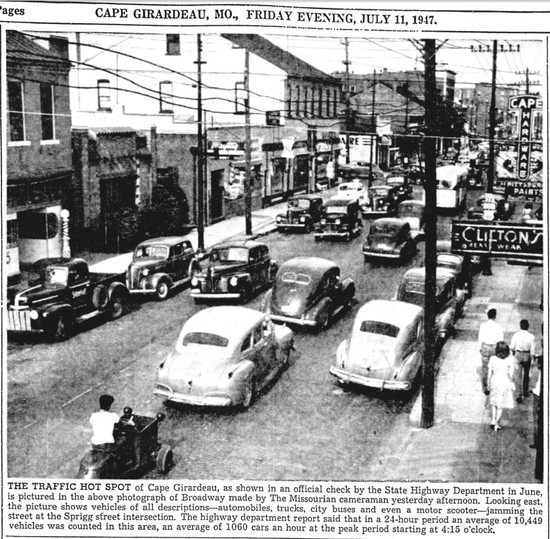 "The Missourian cameraman" mentioned in the caption was undoubtedly G.D. "Frony" Fronabarger. His filing system was, to say the least, a bit haphazard. A negative of this image hasn't been found. Even if it had, the photograph doesn't give a clear view of 640 Broadway. The single-story, white building tucked behind the massive Bauer Bros. Bakery is the building in question. My best guess is that in 1947 this was the home of Mullen Appliance Co., which sold Frigidaire appliances. Part of an advertisement for Frigidaire is visible on the west wall of the building. The store was operated by Noble B. Mullen. The 1947 City Directory shows Mullen also sold Hoover cleaners and Speed Queen washers.

Here's another view from Sprigg Street looking north, with the corner we're interested in barely showing: 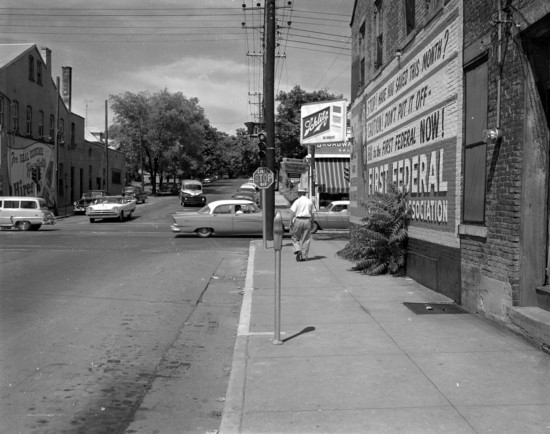 Historic preservation consultant Terri Foley helped fill in some of the blanks regarding this busy corner.

As early as 1893, according to Sanborn insurance maps, it was the location of a harness shop. Morton Bros. Harness & Saddlery was identified with that spot many years. In March 1918 a longtime employee -- O.O. Bowers -- bought the business. He continued to operate it there until 1918, when he sold out to Meyer & Suedekum Hardware Store in Haarig. An article in the newspaper said Bowers intended to devote himself full time to the development a "motor plow" he had invented, although the story doesn't say whether he would continue his work at the Broadway address.

Longtime Cape Girardeau realtor Thomas M. Meyer confirmed that the building once housed the offices of Ben Vinyard Realty. In fact, his father, Thomas L. Meyer, got his start with Mr. Vinyard in 1946, although at a different location. According to Thomas M. Meyer, the structure was sold to Jerry Ford after 1979, and it was torn down for parking.

Thanks to Mr. Meyer for the history lesson. Now, if we could just find a good picture of that corner...