A long time ago, when I was just a kid, I thought that the memorial marker at Cape Rock Park was THE Cape Rock. You know, part of the promontory Frisco Railroad blasted away in 1904, so that people could ride the rails to the World's Fair in St. Louis.

The rock was actually erected on the site by Dennis Scivally, who was a civil engineer for the Cape Special Road District. Scivally had the monster boulder moved from an old home site on North Main Street in 1933, his workers setting it into a concrete base.

However, within a week of the memorial's placement, vandals struck, defacing it in some manner. Here's the story of the rock's installation and "mutilation": 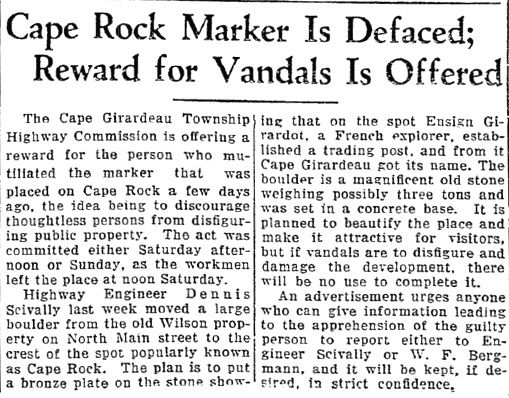 Eventually, the stone was restored and a bronze tablet was installed with its now familiar inscription:

"On this rock promontory, which originally projected into the river and formed a Cape, Ensign Girardot, a Frenchman, established a trading post about 1733. From this site Cape Girardeau took its name."

That Cape Rock Park even exists is thanks to some forward-thinking residents who bought the land in 1919. The tract, part of what was known as the Upper Farm, was owned by St. Vincent's College. Prior to 1919, the Vincentians had tried to sell the approximately 107 acres several times as park land or as a golf course. However, nothing came of those plans, and in 1919 it was decided to divide the acreage and sell it for commercial use.

At that point, the Cape Girardeau Commercial Club stepped in. The club found enough people willing to pool their money to buy the land under the name Cape Rock Park Association, in order to preserve the historic spot.

This June 4, 1919, story lists the stockholders  in the association:

In 1920, stockholders transferred 80 acres to the Cape Girardeau Country Club for its golf course.

In May 1931, the Cape Special Road District began development of Cape Rock Drive, along with its roadside parks. The district acquired the heart of Cape Rock Park -- the knoll upon which the monument stands -- when it purchased the right of way for the drive.

The association deeded the rest of the park land to the road district in 1955, and in 1973 the land became part of Cape Girardeau's public parks system. Much of the land contained in the park remains undeveloped.

Throughout the years, the stone erected by Scivally has remained, a reminder of the man for whom Cape Girardeau is named, as well as the people who cared enough to preserve a small piece of this town's history.