I thought I would write a blog about Thanksgiving, but history of the day the nation thanks its Creator for all its blessings is old hat. Everyone knows the stories of pilgrims and Indians (Native Americans for the PC among us).

But did you know the date was fiddled around with during the Great Depression? I had forgotten that, until I read a general history of the day online.

Since President Abraham Lincoln recognized the need for a day of prayer in the midst of the Civil War in 1863, Americans had been celebrating Thanksgiving on the last Thursday of November.

However, bowing to the pleas of retailers, President Franklin D. Roosevelt moved the holiday up a week in 1939. The thinking was the move would provide an extra week of Christmas shopping. Hopefully, that would translate into more money in the till for the country's merchants.

According to About.com, 23 states (Missouri among them) made the switch, while 23 others kept to the traditional date. Colorado and Texas celebrated both dates.

Girardeans voiced their objections to the move when it was first suggested in August 1939: 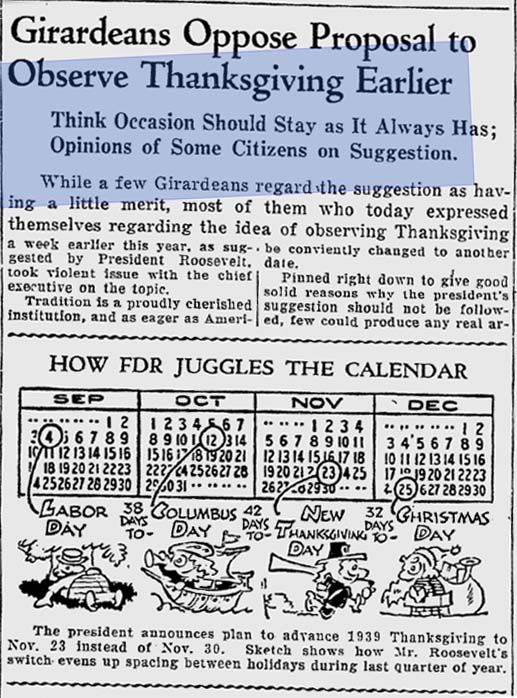 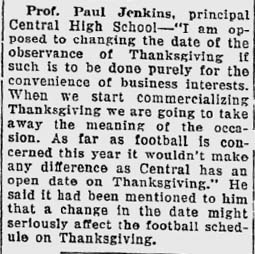 The move wasn't popular with the public, and in 1941 Thanksgiving moved back to its proper place on the calendar.

Thanks for reading, and don't forget to observe the day as it was intended: Thanking God for all His blessings.