A Cape Girardeau business owner was kind enough to share several old photographs with the Missourian recently. He thought they might be used to illustrate the upcoming Veterans Day holiday. Any of the photos would serve this purpose extremely well, but the one included with this blog struck me as particularly thought-provoking. It was taken in 1914 by amateur Cape Girardeau photographer Louis Krueger.

Normally, I would crop this image tighter, but I felt Krueger's handwritten note needed to be included: 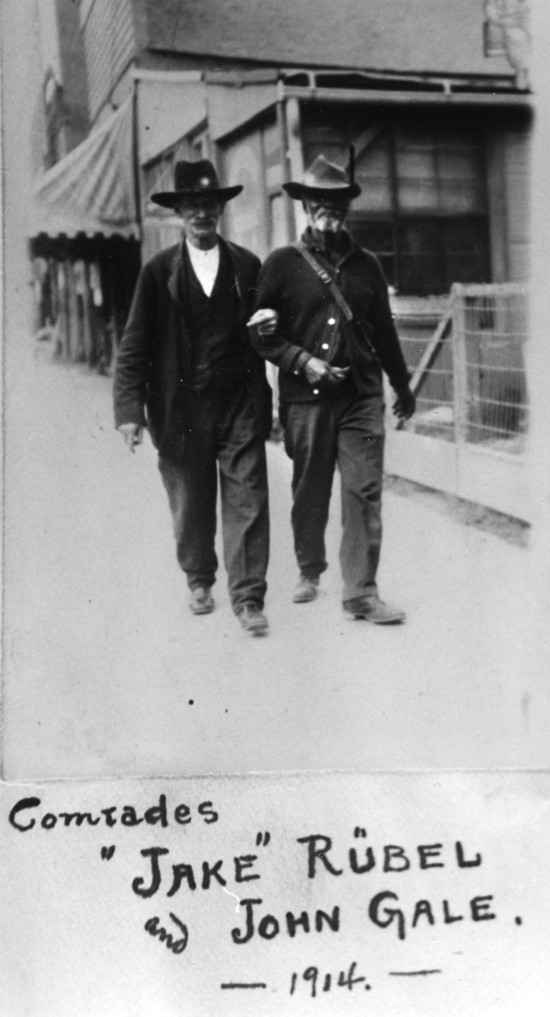 We believe the picture was made on a Cape Girardeau street and shows two veterans of the Civil War. Literally, arm-in-arm they walked along a sidewalk, Jacob "Jake" Ruebel, on the left, and John Gale on the right; Ruebel a white man and native of France, and Gale a black man, born into slavery in Maryland.

How they came to be "comrades" isn't known. Perhaps Kreuger was simply referring to their war service.

Ruebel, who was born in 1840 in France, served with Co. G, 1st Mo. Engineers. According to "Hearts of Blue and Gray: Citizens of Cape Girardeau County in the Civil War, Vol. 1," the unit saw service in Tennessee, Georgia, Arkansas, and the Carolinas.

Ruebel's obituary, published March 18, 1918, in The Southeast Missourian says: "During the civil war he cast his side with the north and fought valiantly to the end. After the close of the war he took up farming and followed that vocation until several years ago when he retired and moved to Cape Girardeau."

As the badge on his hat shows, he was a proud member of the Grand Army of the Republic, and "always took a leading part in every celebration in which that patriotic body of veterans attended. Likewise he never missed a funeral of a member of that body."

Details of Gale's military service is sketchier. Ancestry.com lists a number of John Gales serving with the "U.S. Colored Troops." Without further research, it's impossible to tell which records are for Ruebel's comrade.

His obituary, published Oct. 8, 1923, gives just a glimpse of the man: "John Gale, 85 years old, a negro veteran of the Civil War and of the old slavery days, died at his home at 505 North Middle street late Saturday night, due to old age... He came here after the close of the war and had made his home in the area."

Here are the full obits for Ruebel and Gale: 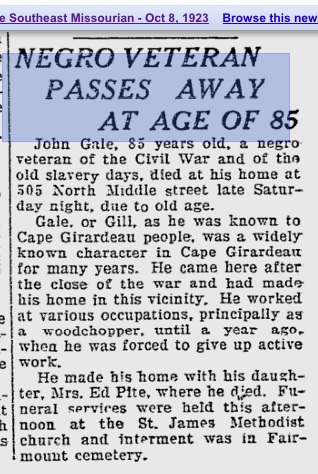 Both men fought to preserve the Union. Both men chose to live in Cape Girardeau after their service. Both men died here, and both men are buried at Fairmount Cemetery.

I would say "comrades" is a good word to describe them.