A lot has been written recently about the ignoble fate awaiting Old Jefferson School. The long-neglected ruin is destined for the wrecking ball, unless someone with deep pockets and a creative vision steps forward to save it.

Several such people did that for another abandoned school in Cape Girardeau in 1953.

For 30 years, the Broadway structure served as a school. High school classes were taught there until 1911, when the Board of Education moved them to Old Lorimier School on Independence Street.

Classes ceased at Broadway School in May 1937, and that summer the board voted to close it permanently. New Lorimier School had just been built, and it was determined Broadway School was no longer needed.

After that, the building saw many different functions. It was used as a recreation center in the late 1930s by the National Youth Administration. Later, it became district headquarters from the Works Progress Administration.

World War II ushered in a new era for the school. The Aircraft Training School held classes there in 1942. And from 1944-46, it housed the War Emergency Pipeline Corp.

After the war, Southeast Missouri State University -- then Cape State College -- leased the structure for student housing. There were 12 units in the building for married students; 60 to 70 single men also lived there.

Throughout the years, the Cape Girardeau School Board held title to the building, and it wasn't until April 1953 that it was offered for sale to the public. In July of that year, the board sold the school to a group of unidentified investors: 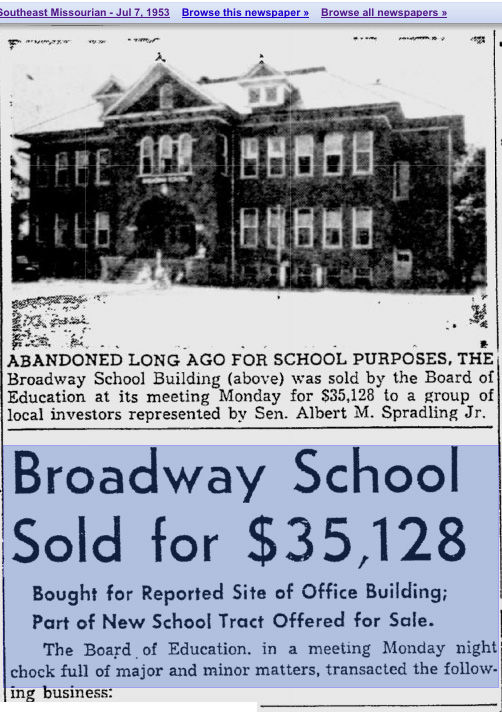 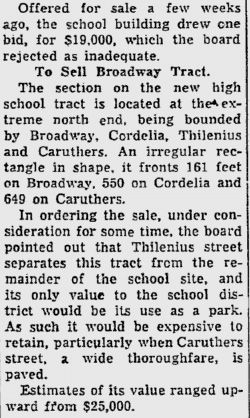 The next month, plans were announced to convert the building into a medical office building: 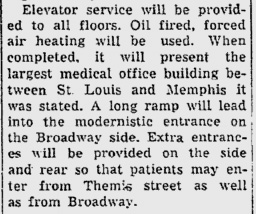 Here's an interesting view of the removal of the original pitched roof with a flat roof: 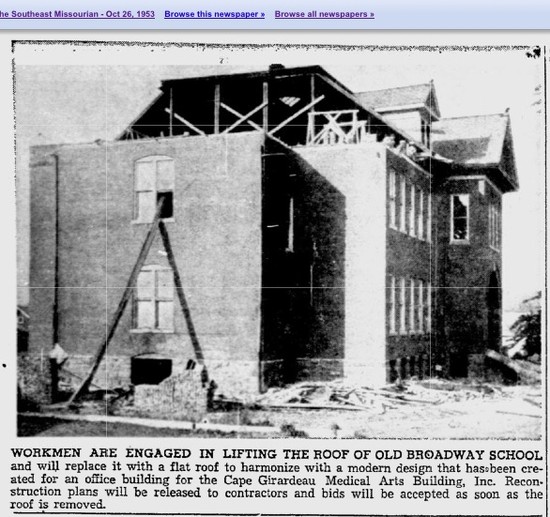 The doctors with the vision to see a new future for Broadway School were James A. Kinder, Milton Shoss, Edward D. Campbell, John T. Crowe and Harold D. Ridings.

Thanks to them, and the talents of architect Fred Dormeyer Jr., the old building continues to serve the public in a new way.

Many of us wish Old Jefferson would find such benefactors.