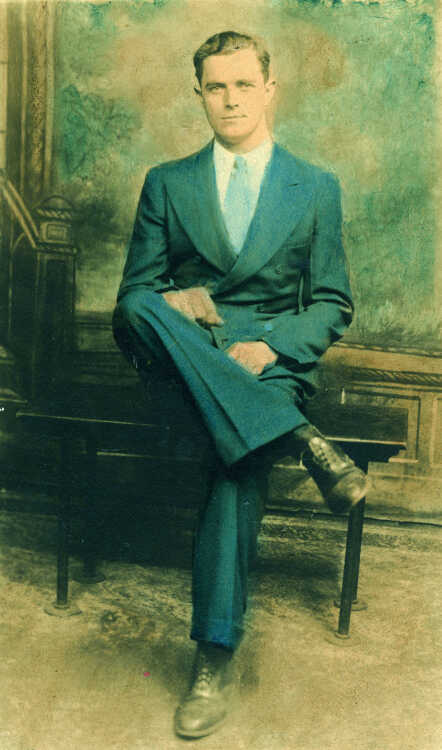 Each Thursday, I try to bring readers an interesting item from the Missourian's archives. But this week I wanted to write about my dad and his 94th birthday. I searched the files, but found him mentioned only in obituaries, my sister Jean's wedding, and birth announcements for my nieces. Still, I'd like to share my thoughts about my Poppy...

Last Tuesday was my father's 94th birthday. My family celebrated the day at his funeral Mass.

That may seem like an odd word to use: Celebrated. But it was truly a celebration of his life and his going home to Our Lord.

Louis Edward Sanders was a kind, gentle man. He was born Sept. 27, 1917, on a farm near Commerce, Mo., to Henry Sanders and Hulda Sander Sanders Hilleman.

As a child, he learned to love the outdoors. He roamed the hills of Scott County as a youth -- and later as an adult -- with a gun in his hands, hunting deer, squirrel, rabbit, quail, ducks, geese...whatever was in season.

He tried to instill that same love of nature in his children, taking us hunting and fishing. But it didn't really matter whether we caught a fish or shot a squirrel. Time with Dad was special.

My father worked for about 30 years at the Cape Girardeau shoe factory, doing what must have been mind-numbing, repetitious labor. But it put food on the table for his family at a time when his first profession -- carpentry -- couldn't.

He loved my mother, Frances Stehr Sanders. After 13 years of waiting for the Catholic Church to approve their union, they were married at St. Mary's Cathedral in 1956, the same church that buried my mother in 2004 and my father last week.

True devotion was never better illustrated than the dozen years my father cared for my mother after a stroke in 1992 left her partially paralyzed and in a wheelchair. No nursing home for Mom; Dad became her hands and her legs, caring for her in every way at their home.

At the close of his life, the memories of the good times our family shared have come flooding back, taking the sting out our loss and helping to alleviate the pain of the last three years spent in an Alzheimer-induced haze.

On the morning of Sept. 24, Dad finally gave up the struggle, passing away in his sleep with my brother by his side.

Mom and Jean came to take him home, where he's at peace.

And my brother and sister, nieces, and cousins are left with the memories of a sweet man and his love for us.