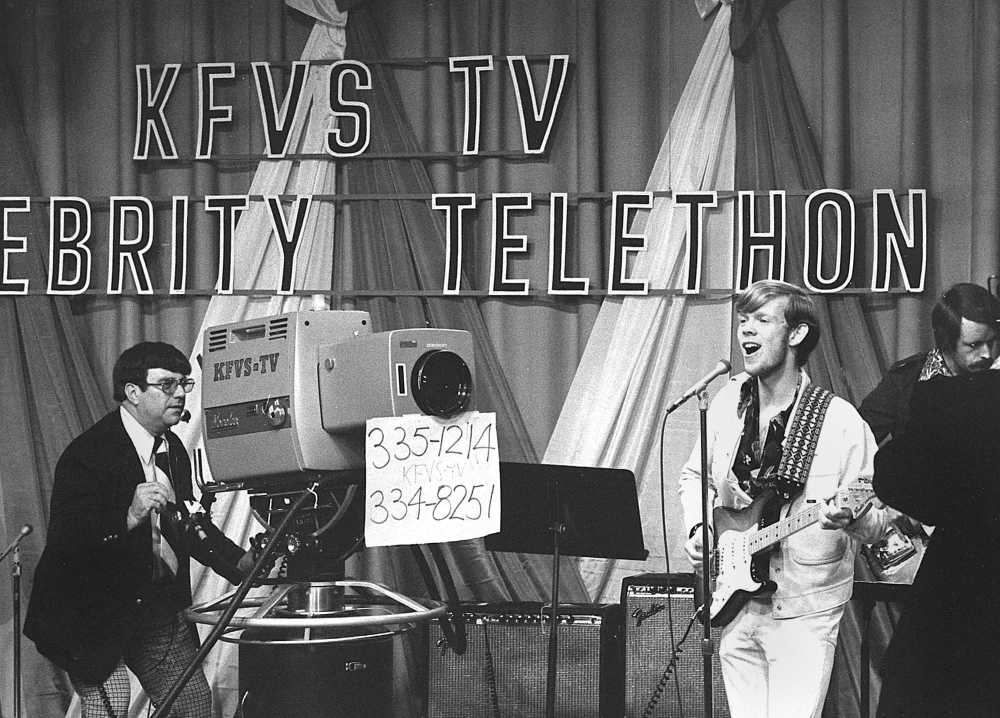 Cameraman Harold Bollinger focuses on Jon Walmsley, who portrayed Jason on the television series "The Waltons," as he performs a song on the KFVS-TV Celebrity Telethon for Cerebral Palsy on Feb. 29, 1976. 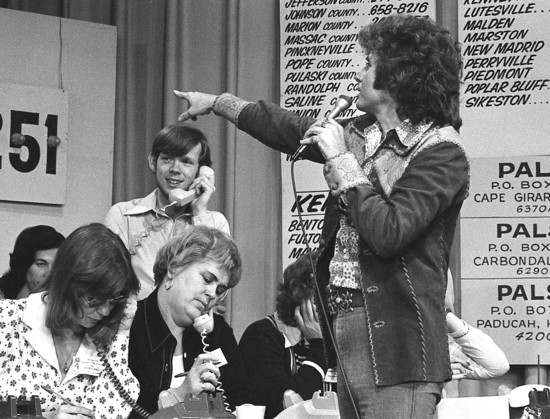 Johnny Tillotson makes appeal for additional monies in behalf of the 1976 KFVS Cerebral Palsy Telethon. Mr. Tillotson was master of ceremonies for the event. Jon Walmsley, star on "The Walton's," talks to a fan over the phone, just one of many duties he performed on the telethon. Volunteers taking pledges over the phone included Mrs. William Morley, left, of Fruitland and Mrs. Sarah Buchanan of Sikeston. The telethon began at 10:30 Saturday night and ended at 5:30 Sunday afternoon with a total of $159,550 in pledges. (Gordon L. McBride photos) 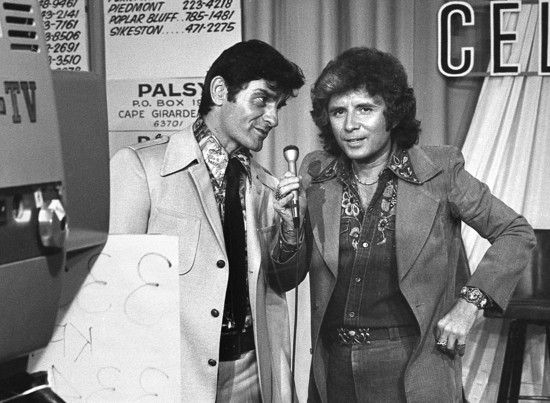 Don Stewart, left, one of the stars of the daytime serial "Guiding Light," talks with Johnny Tillotson at the 1976 KFVS Celebrity Telethon for Cerebral Palsy. 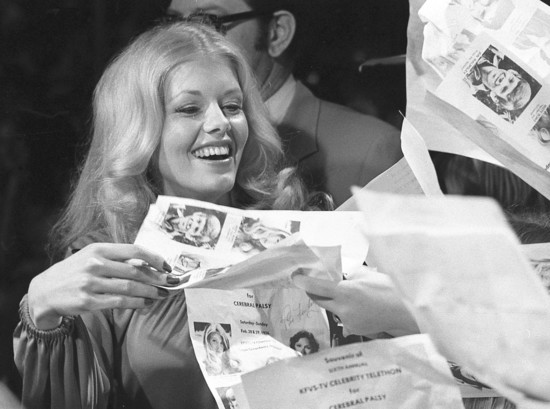 Misty Rowe, who appeared on the "Hee Haw" television show, signs autographs at the 1976 KFVS Celebrity Telethon for Cerebral Palsy.

A wide range of television, film and recording stars make up the list of celebrities who will appear in the KFVS-TV Celebrity Telethon for cerebral palsy beginning tonight and continuing through most of Sunday.

Back for his fourth year as host will be Johnny Tillotson, night club and recording personality. Mr. Tillotson was master of ceremonies for the 1972, 1973 and 1975 telethons.

Appearing with him will be Jon Walmsley, who portrays Jason on the popular television series, "The Waltons." This is his second year as part of the telethon cast.

Pat Finley, who plays the pert sister of Dr. Robert Hartley on the "Bob Newhart Show," will make her first appearance this year, as will Don Stewart, one of the stars of the daytime serial "Guiding Light."

Rounding out the star-studded cast will be Misty Rowe, who has appeared on "Hee Haw," and who now has a role in the new film on the life of Marilyn Monroe, "Goodbye, Norma Jean."

The telethon will begin at 10:30 tonight, continuing until 5:30 Sunday afternoon.

When the 19-hour telethon went off the air last year, $148,000 had been pledged for cerebral palsy centers in southeast Missouri, southern Illinois and western Kentucky.