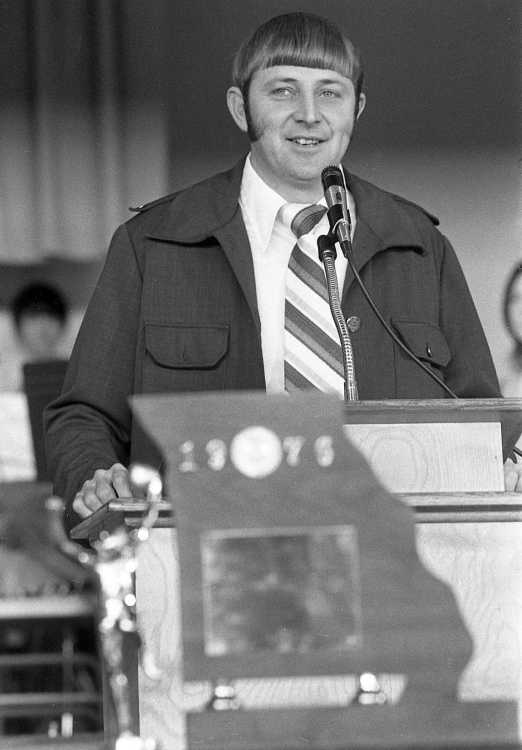 Members of the Class A state championship Scott Central Braves basketball team were honored at an assembly held at the school Monday. Shown below are the three all-district players for the Braves, from left, James Williams, Otto Porter and Ricky Thomas. At right, Coach Ron Cookson addresses the assembly. In front of speaker's rostrum is the 1976 championship trophy. (Gordon McBride photos) 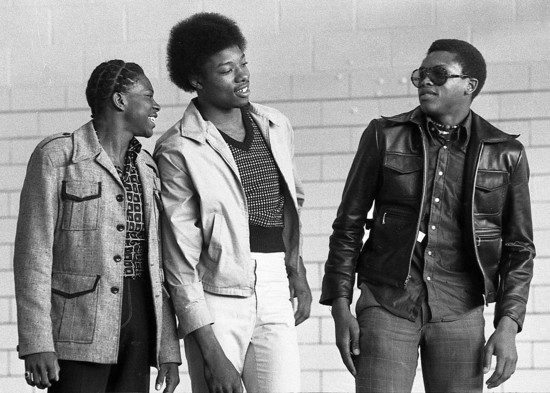 COLUMBIA -- Otto Porter got his record and Scott Central's Braves captured their small-school state championship here Saturday as the Morley-based troops from southeast Missouri scored six of the first eight points of the game in smacking the state's top-ranked Glasgow team 82-71.

Porter, a 6-foot-3 frontliner who has averaged right at 30 points a game during the season, hammered in 30 in the championship game to bring his four-game, state tournament scoring totals to 145, 16 more than previous record held by Larry Butler of Glasgow, who had set the record in 1975.

A year ago, Glasgow was ranked number one, unbeaten, but lost to Advance in the semifinal round. This year, Glasgow entered the title game with a 30-1 record.

The win was the 31st in 32 starts for Coach Ron Cookson's Braves, with that lone loss a one-point decision to Charleston in the championship round of the University High Christmas holiday tournament.

Since that time, the Braves have reeled off 20 straight victories.

The Braves, well known for their offensive firepower, used a well-organized, tenaciously-tight defense in forcing numerous Glasgow turnovers, and meanwhile, the frontline duo of Porter and Ricky Thomas was awesome. Thomas, a 6-2 center, helped Porter on the boards, and added 29 points to the Scott Central totals.

Adding a third offensive punch was James Williams, who does the bulk of the ball handling for the Braves. Williams drew Glasgow defenders his way, especially in the final quarter, and finished up with seven of nine line shootings, to go along with a couple of buckets, all good for 11 points.

Glasgow, which has now won 95 of its last 98 games over the past three years, used a balanced scoring attack, led by Cal Davis, a six-foot guard, with 17 points. Alan Terrill added 14 from his backline position, and reserve forward Wayne Wright came off the bench to add 13 points. Rounding out the two-figure people was Joe Davis, a 6-5 frontman, with a dozen points.

Porter tied the old scoring record with his 15th and 16th points per game, a bucket with 6:30 left in the second quarter to put his team into a 23-16 lead. It wasn't until early in the third quarter that he got the record-bucket, with 4:50 left.

"All I was thinking about was winning the ballgame," grinned the big senior wingman after the game. "We've been working toward this since the eighth-grade."

Seven of the varsity members for the Brave unit are seniors.

"I said before that if we could stay out of foul trouble, we could play with anybody," said Coach Cookson.

The Braves did encounter some foul problems along the way, but all five starters played all the way, three of them with four personals.

But, Coach Cookson sent his squad into a zone defense over the final half of the fourth quarter in order to hold down the fouls.

It worked. Williams got his fourth with two minutes to go in the game.

Glasgow outscored the Braves from the field, 64 to 56, but trailing throughout the game, the Yellowjackets fouled in efforts to get possession of the ball. The Braves covered on 26 singles, with 16 of them in the final quarter.

Scott County Central won its 18th state championship in school history on March 14, 2015, the most in the state. It was their second Class 2 title.