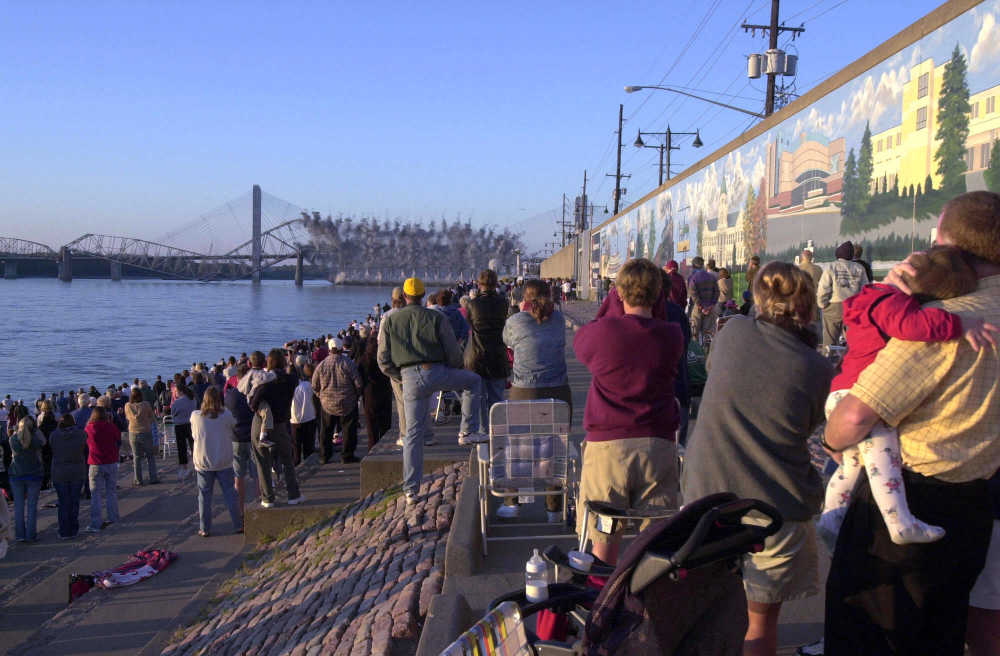 It was ten years ago when hundreds of people watched the demolition of the old Mississippi River bridge from the Cape Girardeau Riverfront Park, just before 7 a.m. Thursday, Sept. 9, 2004. (Fred Lynch photo)

A demolition blast Thursday tore apart the old Mississippi River bridge at Cape Girardeau, doing more damage than expected and leaving wreckage scattered across the river like the backdrop of a disaster movie.

It wasn't supposed to happen that way. Still, state and federal officials said the wreckage in the main navigation channel should be hauled from the river in time for barge traffic to resume this morning as originally planned.

The demolition blast--its numerous explosive charges sounding like a cannon and shooting up black clouds of smoke--dropped the 671-foot-long span nearest the Missouri shore into the river as planned.

But the blast also set up a chain reaction that damaged the other remaining spans of the bridge. The blast caused the other 671-foot section of the main span to jackknife into the river, tearing out part of a concrete pier and sending one end of the remaining 314-foot span crashing into the water.

The blast shortly before 7 a.m. left hundreds of spectators, the demolition contractor and city, state and federal officials guessing about what went wrong.

"It may have been the vibration from the blast," said Stan Johnston, Missouri Department of Transportation engineer. "Something happened to put more stress on the bottom beam of the second span and it failed."

"I have never seen another steel span fail," said Gustafson, who has demolished hundreds of structures with military-grade explosives.

"The charges had nothing to do with it," he said of the two other spans collapsing.

As for the damaged concrete pier, Gustafson said it had little in the way of steel supports in it unlike today's concrete structures. That may have contributed to part of the pier falling into the river when the second bridge span buckled, he said.

The fact that the main span near the Missouri shore and the second large span were actually built as part of a single steel truss may also have contributed to the failure, MoDOT officials and Gustafson said.

"It failed and it was a domino effect," Gustafson said.

The $2.23 million demolition of the 76-year-old bridge span began with a demolition of some of the Illinois approach spans on Aug. 3. A blast on Aug. 26 took down another 314-foot span, leaving only three spans standing.

All of the spans were scheduled to be demolished by the middle of this month. Thursday's blast just hurried the process along, Johnson said.