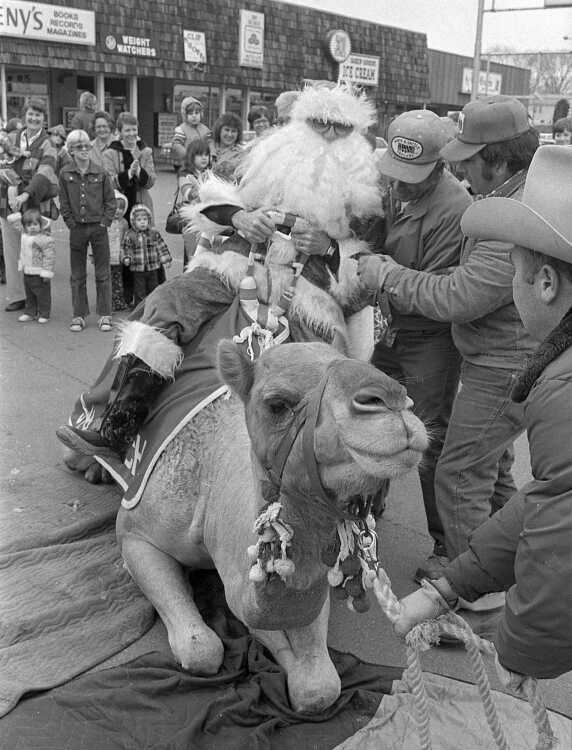 With no snow on the ground for his sled, Santa Claus found an alternate means of transportation to travel to the Town Plaza Shopping Center early today. It marks the first visit this year of Santa Claus to Cape Girardeau. (Fred Lynch photo)

That's Dave Hale in the foreground directing the camel to kneel. Hale operated the 5-H Ranch with its exotic animals here for many years. Living Nativity scenes featured camels and other animals from the ranch. Hale's eight-camel wagon hitch was a favorite in many parades around the country.

In rancher Dave Hale's eyes, he hasn't had a real job for the last 40 years.

Instead, he's had a whole heck of a lot of fun. And it all began with one camel.

In 1960, he and wife Maxine Hale bought over 150 acres just outside of Cape Girardeau. They made a living on the grassy-rolling landscape of the 5-H Ranch by breeding quarter-horses, but his stud died within the first few years.

Before Hale could replace it, someone offered to sell him a different kind of livestock -- a camel. He thought, "Why not?" So, he traded their tractor for a camel.

Though the 5-H Ranch is closed to the public now, it operated as a drive-thru ranch until the mid-1980s with chimpanzees, lemurs, osteriches, llamas and leopards.

Fast forward to today, and the camels have taken over. Hale now owns about 600 head of livestock on 120 acres, with about 100 camels, over 300 deer, 20 donkeys, cattle, sheep, a zebra and a giraffe.

"They smell like money," he said with a laugh.

The bread and butter mainly comes from booking camels in parades, private events, movies and commercials, nativities and fairs. Hale's camels have stepped into every state and major parade in the United States, he said. Sometimes, Hale's 14-foot giraffe, J.C., also attends functions.

One white camel and Hale's youngest son appeared in the movie "The Scorpion King." Other camels were featured at the grand opening of Donald Trump's Taj Mahal and in a photo with Cape Girardeau Prosecuting Attorney Morely Swingle for his upcoming children's book.

Part of Hale's success comes from how he raises his camels.

Camels have a natural tendency toward aggressiveness when they have little interaction with humans. So, Hale hand nurses each camel born in his stable, averaging around 30 to 35 babies a year. His tender attention raises the camels to have a gentle, affectionate nature that is curious of humans.

So, when a camel sticks its velvety nose in a person's face, it won't bite or spit. It just wants a wiff of each individual's scent.

Besides, camels spit very rarely, Hale said, and their humps are not made of water but fat cells that store excess water. Camels are also smart enough to remember their cue during Christmas nativity pageants.

So much that several churches request camels for the same days. That's when their children help out the most in transporting and caring for the camels. Otherwise, it's a family business.

"None of our kids have real jobs," Hale said.