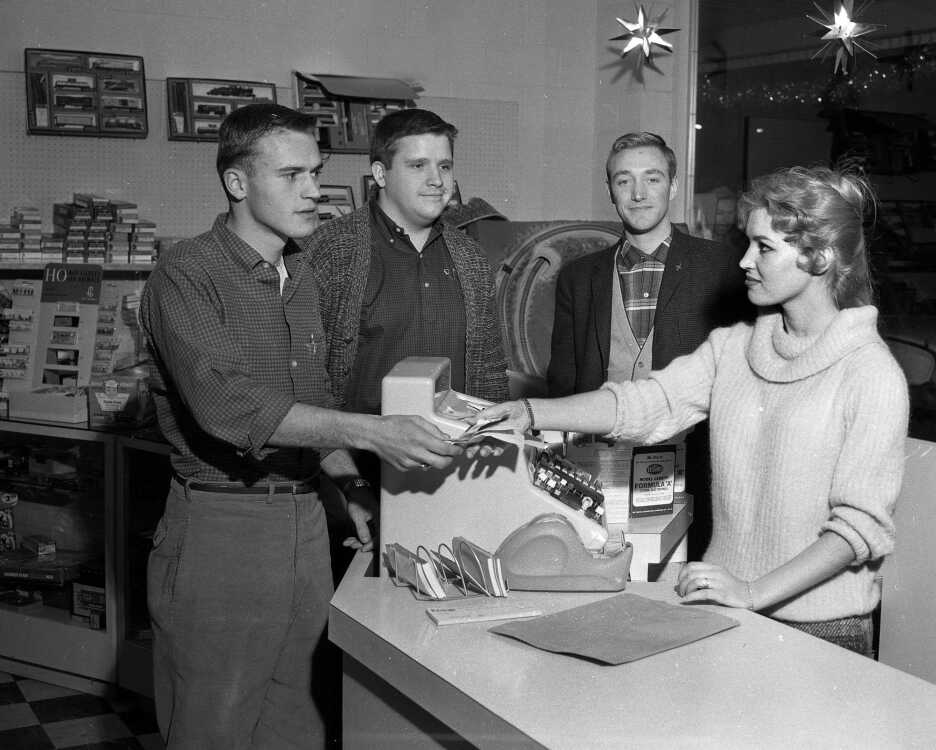 Nabbing thieves is not part of their regular job, but these employees of the Hobby Horse store in the Town Plaza Shopping Center teamed to apprehend a Texas man who, along with three others, attempted to steal money out of the cash register at the store Thursday night. The are from the left, Richard Bennington, David Moody, Newell S. Ferry, store manager, and Miss Judith Blankenship, who first spotted the thieves. (G.D. Fronabarger photo)

Alert employes of the Hobby Horse Store in the Town Plaza Shopping Center not only foiled an attempted theft from a cash register but also teamed to apprehend one of the thieves Thursday afternoon at 5.

After the thieves were detected they ran for their car but store employe, David Moody, jumped into the vehicle and started wrestling with the thieves while store manager, Newell Ferry, broke out the front windshield with a sled from the store. He grabbed the sled as he ran from the door.

One of the men was apprehended and herded into the W.T. Grant Store office until police could arrive. The others escaped, it was reported to police. The car, body damaged, remained in the parking lot.

It all started when four Negro men entered the store, accompanied by two women and seemingly were browsing around. While one of the men tried to distract the attention of a clerk, another man reached into the cash register and grabbed $50. The clerk, a high school student at Central, saw the attempted theft and grabbed the man's arm, causing him to drop the money. At the same time she screamed for other employes, who came running to the scene as the Negroes fled hastily. It was then that Moody and Ferry went after the thieves.

"Moody should be given the real credit," Ferry told The Missourian. "He didn't know if those guys had guns or knives in the car but still he opened the door and climbed in. He's a pretty husky boy, about 240 pounds, so I guess he knew how to handle himself."

"All I did was bang on the windshield with the sled," he added. "It was the first weapon available." The Hobby Horse handles toys.

The apprehended man, Luther Dorsey, 32, of Waco, Tex., was cited by police on a charge of investigation of petit larceny. Police report a check with Texas authorities revealed that the man has a long criminal record. Two Negro women, 28 and 22 years old, also of Waco, were apprehended on Good Hope a few minutes later.

Police are continuing to investigate the matter.