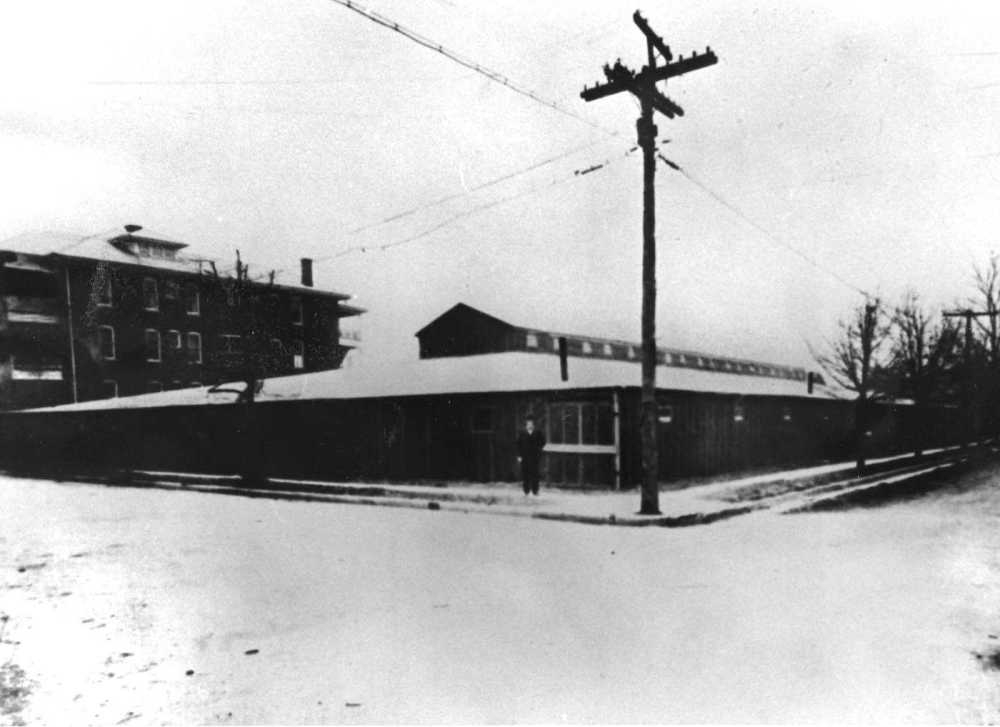 Billy Sunday's tabernacle in 1926 at the southeast corner of Bellevue and Middle streets in Cape Girardeau.

The Sunday tabernacle, which for the next few weeks will be the mecca for thousands of Cape Girardeans and Southeast Missourians, although necessarily rough and temporary construction, has been designed for comfort as far as is possible. While not an imposing structure, it is built to provide the most room, and give the most service.

Safety has been stressed in the construction of the big building and there are a number of exits from it, practically one from each section of seats. No person will be more than 40 feet from any exit. In addition to this, the boards on the outside wall have been nailed so that a strong blow would knock them off, making possible for a few men to open an exit within a few seconds if need be.

Six furnaces will heat the building during the revival. These have been going for several days warming up the big building for opening day. The furnaces have been located so as to give the maximum amount of heat.

For protection against fire, several hundred feet of fire hose, already connected to a hydrant, are ready for use on an instant's notice and have been placed in a convenient place, and may be operated by any one.

Entering the tabernacle the visitor is impressed with the vast size of the structure. Row upon row of seats extend along the entire length of the building, while in the front, which is the south end of the building, there is a big tier of seats, which the choir will occupy. It is in front of chorus seats that there is a platform, about 12 feet square, which the evangelist will occupy. It is elevated two feet higher than the remainder of the platform, but is unadorned or decorated except for a small pulpit. Over this platform hangs a big awkward looking arrangement of boards, the amplifier which makes it possible for a person in the remotest section of the building to hear distinctly.

Several departments have been created at the tabernacle for various features of the meeting. There will be a hospital room where cases of fainting and illness will be treated. There will be a "lost and found department." This may be a busy room, for every article that is reported found in the building will be taken there to await identification by the owner.

Another room has been set aside as the "library" or book room where the song books which will be used in the meeting will be on sale. These books together with others containing the life history and some of the sermons of the evangelist will be on sale at this booth every meeting, except those on Sunday.

Cape Girardeans, who within the next few weeks will hear much of the term "sawdust trail" made famous by the evangelist Billy Sunday, will be interested in knowing that it originated in the west, where a path or road is called a trail.

There a trail in the usual instance leads to life or home. For the hunter or lumberman lost in the woods the trail is his salvation.

So when Sunday adopted the policy of having tabernacles without floors so that sound would be minimized, and sawdust was placed over the ground for the comfort of the people, the term "sawdust trail" a "road to life" a "road to home" came into use. Today it is an accepted term.

Billy Sunday felt that revivals held in tents were dangerous. Six thousand dollars was raised to build the tabernacle, which could hold up to 5,000 people. Sunday preached to approximately 250,000 people in the five-week period. His last day to preach was on Easter. He did four sermons that day with a total of 20,000 inside the tabernacle and 2,000 outside. Sunday was born in Iowa, and his father died prior to his birth. His mother tried to raise Sunday and his brother, but later they were placed in the Soldiers Orphanage Home. When he was 14, he left the orphanage and worked as a stable hand for Col. John Scott, governor of Iowa. While playing baseball one day, he was discovered by the Chicago White Stockings and would later play for the major leagues, until 1890. While recuperating from an injury, Sunday began to preach, and he became known as the baseball evangelist. He returned to Cape Girardeau in 1933 and died in 1935. The tabernacle later was taken apart and the wood recycled to build the first Houck Field House.