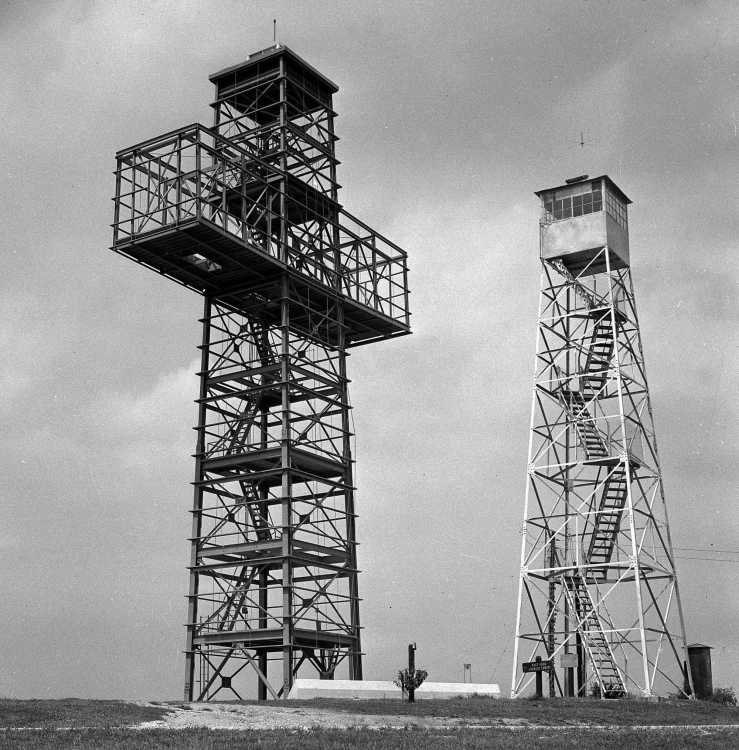 The Bald Knob Cross is shown during its construction in 1959. A nearby 60-foot fire tower would later be razed on Bald Knob near Alto Pass in Southern Illinois. (G.D. Fronabarger photo)

Bald Knob, scene of many Easter sunrise services near Alto Pass, Ill., has a new look today as the shadow of a 60-ton giant cross falls across the landscape.

The 1034-foot elevation of Bald Knob is topped by the 111-foot reddish-orange structure, which when completed will be covered with sheets of white porcelainized metal.

Four banks of floodlights mounted in ground-level concrete structures around the base of the main tower will illuminate it.

The structure, built to withstand 150-mile winds, has a base containing 730 tons of concrete and steel.

To Be of Service

Clyde Presley, grounds superintendent for the Bald Knob Christian Foundation, which is sponsoring the project, says the lighted cross will be visible over a 7500-square-mile area, or at a distance of 51 miles in all directions. Cape Girardeau is 22 air miles from the cross.

The foundation hopes to complete the project by the end of this year. The cost when finished is estimated to be $230,000.

Contributions were reported coming in from time to time.

ALTO PASS, Ill. -- Easter services have been held since 1937 on 1,034-foot Bald Knob. Crowds of up to 15,000 persons have used the four-mile gravel road from this Union County village to reach the hilltop for the annual services.

Construction of the 111-foot steel-framed cross began in 1959. Its porcelain cover was installed since last year's services, and a new battery of spotlights is to be turned on Saturday night.

The cross resulted from the efforts of the Rev. Wm. H. Lirely, a retired Methodist clergyman, and Wayman Presley, a former mail carrier in nearby Makanda and now a professional guide in the region's Shawnee Hills.

The idea of a large cross was conceived in 1944 and was built with loans and contributions including funds from sale of 700 pigs, descendants of a group of 21 pigs donated by a Cobden widow.