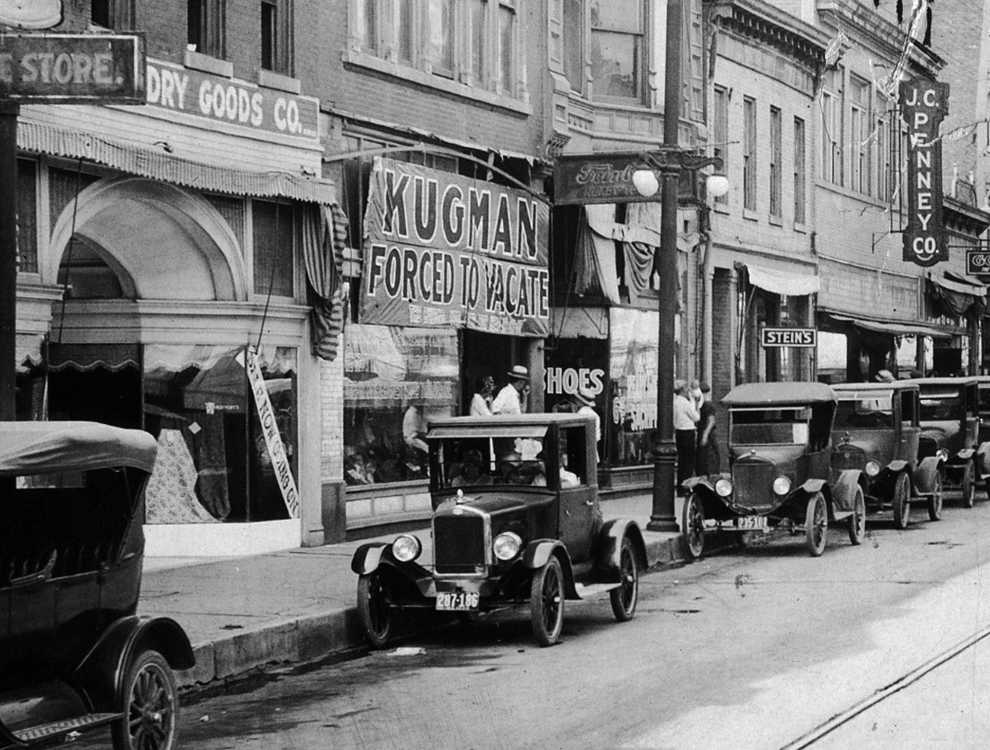 This property in downtown Cape Girardeau has had many tenants over the last century. This scene captures a "going out of business" sale for Kugman's Store.

Here is a portion of an advertisement in the Aug. 19, 1925 Southeast Missourian:

The unexpected has happened. It's goodby Cape Girardeau.

The jig is up--Caught like rats in a trap--The building has been sold over our head and it's "Kugman, Get Out." Nothing else to do but quit the "Good Old Town" and kiss it "Goodbye and Good Luck."

Some mess we're in--puts us in a heck of a shape--a bitter pill, but we'll take our medicine.

The lease was not renewed by J.C. Penney Co. and the store was remodeled for the People's Store which moved from its location at Main and Independence. That business operated there for two years until 1928.

The local Carp and Co. store, 17 North Main, secured a 20-year lease on the People's Store building, 27 North Main, and also the Vandivort Dry Goods Co. building, 25 North Main. Both buildings were remodeled into one room for Carp's.

We found advertising for Carp's as late as 1942. Apparently the store left Cape Girardeau before its lease would have expired in 1948.

The new Carp's Super Discount Department Store brings a new concept in merchandising to Cape Girardeau. The basic idea of this modern system of merchandising is to offer first quality merchandise of every type at "across the board discount prices." This simply means wall-to-wall discount prices on everything.

In 1977, Wetterau sold 16 of its 20 Mohr Value stores to Wal-Mart which took over store operations. The building now houses Hobby Lobby which began there in 1993.