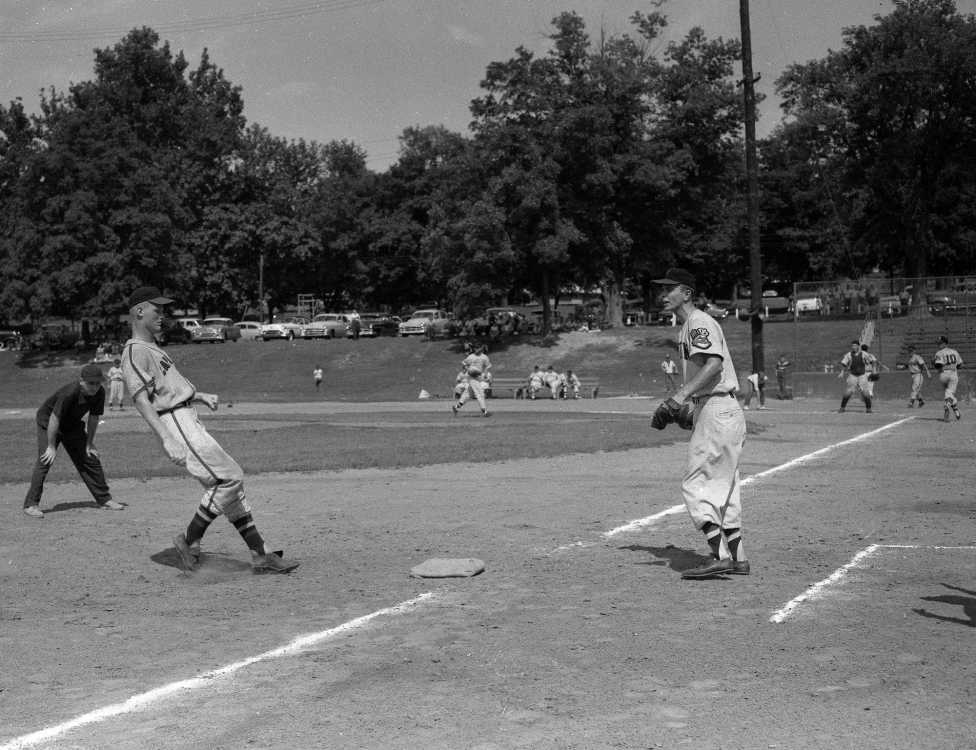 First baseman C.W. Suedekum of the Capahas pulls into third base with his second triple of the game as Holden Third-Sacker Mainey backs up for the throw from the outfield. It was during the Missouri State Semi-Pro Tournament second-round game at Capaha Park in which the Capahas defeated the Holden Chiefs, 10 to 7. (G.D. Fronabarger photo)

Jackson Hitters to Play in Cape

The Capahas will be after their third straight victory of the young season tonight in engaging the Jackson club at Capaha Park. The Caps have won from East St. Louis 12 to 1 and Farmington, 7 to 4.

Manager Lou Weiss will have somewhat of a changed lineup tonight. At first base will be C.W. Suedekum of the Central Tiger state high school champions; Jim Welter will be at short in place of Gordon McBride, who is out of town; while Boss Weiss will hold down the hot corner, and Bob Goodwin will be in right field for Marty Radmer who will be out of the lineup for five weeks while attending school.

Lou Stoops, who has two wins to his credit will be on the mound, with Joe Bertling pulling on the big glove. The infield will be Suedekum, Bob Miller, Jim Welter and Weiss and the outfield Kenneth Hargens, Jack Burns and Goodwin. Game time is 8.

First baseman C.W. Suedekum led the Capahas in batting for .363. He went to bat 80 times and obtained 29 hits. Outfielder Harry Wells was runnerup with .357 although not playing in as many games.