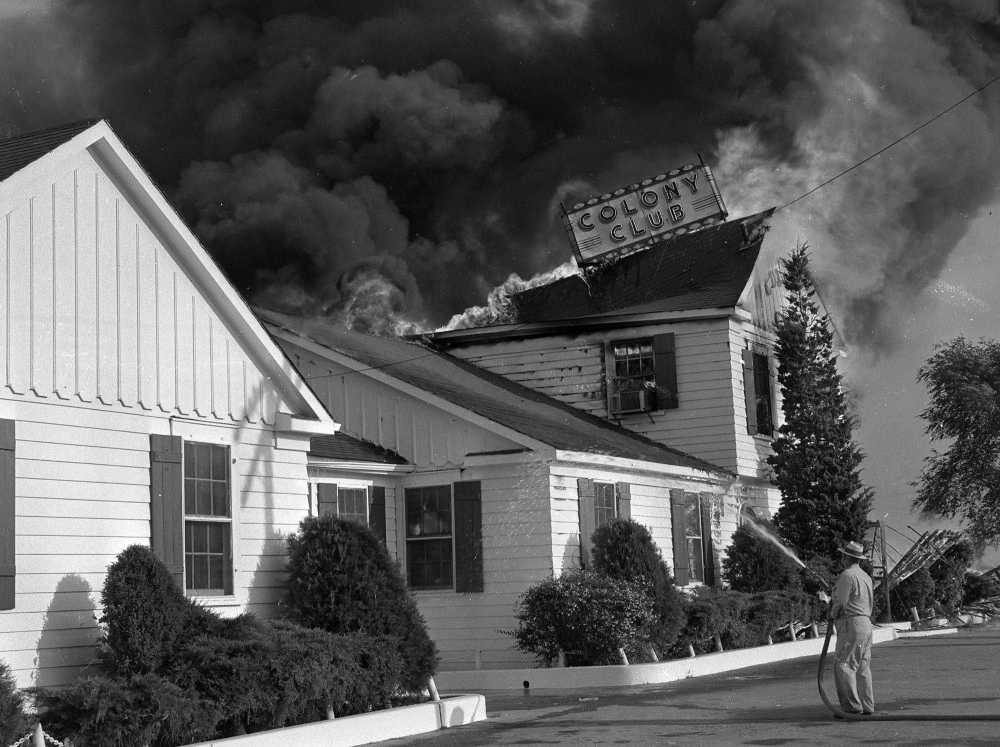 G.D. Fronabarger shot this picture of the fire that destroyed the Colony Club between McClure and East Cape Girardeau, Ill. on June 8, 1959. The story was published in the Southeast Missourian that afternoon.

Southern Illinois' most plush nightspot, the Colony Club, located 4 miles east of Cape Girardeau at the junction of Highways 146 and 3, was destroyed by fire thought to have originated in the kitchen about 6 a.m. today. The loss to the main buildings housing the dining room, and adjacent buildings was estimated to be over $150,000 by observers. Damaged was reported to be partly covered by insurance.

The establishment was jointly owned by John Wilson of McClure and Cape Girardeau and Miles Hill of McClure.

Mr. Wilson said that he was asleep in the upstairs apartment of the building when he heard some youths calling to him. The boys, whose names were not learned, told Mr. Wilson that as they came around the curve on Highway 3 to the north, they could see the flames on the back porch to the rear of the building, facing west. Mr. Wilson escaped with only the clothes he was wearing by jumping out the window.

An attempt was made to control the blaze on the porch and the kitchen next to it, but the flames spread rapidly through the frame building.

Possibly due to the direction of the wind, the main dining room in which the dance floor was located was destroyed first, the flames then spreading back to the bar and club room, which were the last to burn. The bar was located directly in front of the kitchen, Very few pieces of the elaborate furnishings were gotten out of the building.

A fire truck from McClure and one from Thebes went to the scene, but due to the lack of a water supply were unable to be of much help. A large tank near the building for water storage in case of emergency was apparently not put to use. Due to a city ordinance and state rules which prohibits it doing so, the Cape Girardeau fire department did not go to the scene.

Several Illinois State Patrolmen were on hand to direct the large flow of traffic which is also hampered from the intersection to Cape Girardeau because of highway construction work now underway.

The planned program for the widening of the highway includes a strip which was formerly part of the Colony Club parkway.

Defective wiring in the kitchen is a probable cause of the fire, it was reported.

Mississippi reaches stage of 37.4 feet at Cape Girardeau; Missouri River is also rising in Central Missouri and flooding Illinois River is fast moving toward its crest at Mississippi confluence; Ohio River is expected to reach crest of around 52.2 feet at Cairo Saturday; because of high water, Frisco train service from St. Louis to Cape Girardeau is suspended; businesses along Main Street here continue to elevate their merchandise; evacuation continues in Illinois; equipment at Villa Club at McClure and at Colony Club is moved to higher ground.

Illinois state police say that a dice table, a roulette wheel and four slot machines were seized in a raid yesterday afternoon at the Colony Club at the junction of highways 3 and 146; the gambling equipment was taken to the courthouse in Cairo, Ill., and charges of possession of gaming equipment will be filed as soon as the identity of the owner is established.

The Colony Club building on Illinois Highway 3 near the intersection of Highway 146 was damaged last night when lightning twice struck electrical wiring in the structure.

Southern Illinois' most plush nightspot, the Colony Club, four miles east of Cape Girardeau at the junctions of highways 146 and 3, is destroyed by fire thought to have originated in the kitchen at about 6 a.m.; the establishment was jointly owned by John Wilson of McClure, Ill., and Cape Girardeau, and Miles Hill of McClure.

No definite plans have been made for the use of the site where the Colony Club formerly stood at the junction of Illinois highways 146 and 3, says co-owner John A. Wilson of Cape Girardeau and McClure, Ill.; the night club was destroyed by fire Monday morning.