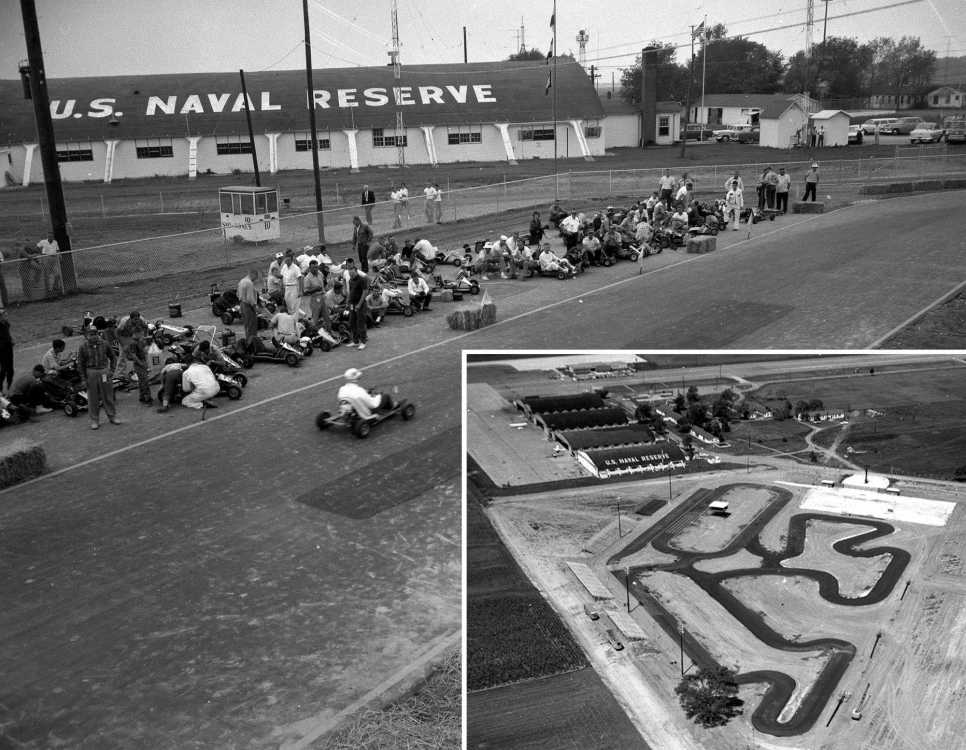 Cape Girardeau may well become to Go-Kart racing--its international headquarters--what Indianapolis is to big car racing if impressive plans now being laid by a group of promoters here materialize.

Backing their claim for international competition in Go-Kart racing is a $150,000 track now being constructed on a 35-acre tract east of the Naval Reserve hangar at Municipal Airport and parallel to Highway 61.

Track construction is underway. Completion is expected in late July. The track, of close grain asphalt, will have a 12-inch silica subbase for drainage. For safety and skillful driving factors, it will have no banked turns. It will be one-half mile long in a series of 18 turns and be 25 feet wide.

The half-mile track will be for international and other forms of competition. During the week when competition is not scheduled, Mr. Petchul said, it will be divided into three tracks open for public use.

A multiflora rose fence will surround the entire racing plant. Inside, the track proper will be surrounded by a chain-link fence to protect spectators.

At the entrance a huge, 31-foot-high, bronze-finished standard bearing an 11-foot futuristic world globe, superimposed with the organization's name, TWIKA, soon will be erected. Around it, at the entrance, will be a brick patio entered through a wrought iron gate. Rose gardens will accent the area.

There will be a pit for 500 karts for use during long races. The grandstand will be parallel to Highway 61. Initial seating capacity will be for 4000, with an increase soon thereafter to 8000. It is planned for future international events to augment this number by the use of removable stands as needed.

An official's stand is included in the plans, and around the perimeter of the track will be 71 flag poles, flying the flags of many nations.

Mr. Petchul said he and his associates viewed tracks throughout the country before designing the one here. "We were disappointed," he declared. "Now we're building a track that will be the best in the United States. It will be a place where drivers can come and race in an international event and find quality throughout."

The corporation will ally itself with Go-Kart tracks throughout the country. It will franchise them under TWIKA rules, which will provide standardized racing conditions. Mr. Petchul said the tracks specified will be uniform and with rules will provide safety for both operators and spectators. Insurance will be provided by the organization. Mr. DeLong is formulating a countrywide racing program from the TWIKA office in Marquette Hotel.

A part of the overall plan is racing for points over a set period of time, with the driver having the most points at its termination to become the national individual point champion. The international champion will be decided annually at the major race here.

Sectional and regional events are planned, along with national and international, with winners in regional competition to receive expense-paid trips to the world's championship here.

The first international competition, expected to attract between 400 and 600 karts and drivers from the U.S. and foreign countries, is scheduled over a seven-day period, Aug. 21-27. Divided into 10 different divisions, racing will be held in age brackets from six years upward.

On Oct. 7 and 8 an international team championship event will be held. It will be a three-cart relay race in two classes.

It noted that there were two other karting organizations claiming their races decide the world championship, one of them at Nassau in the Bahama Islands.

"This is the most wonderful track I have ever raced on," Andy Watson, the new overall world champion kart driver said of the TWIKA Speedway.

In answer to a question whether TWIKA would survive in its competition with other go-kart groups claiming their races were for the world's championship, Watson told The Missourian, "I predict this TWIKA will be the biggest success in go-karting. I believe what they say that their races are 'Go-karting for go-karters.' All karters have a class in which they can race."

Watson, of Kansas City, won the $1000 prize, a three-foot trophy, and six months possession of the six-foot Eddie Rickenbacker Trophy.

The Jan. 10, 1963 Southeast Missourian reported the TWIKA properties were sold.

Kart Unit is Bid in

Under formal execution, Sheriff John Dennis of Scott County today sold at public auction in Benton the properties of the World International Kart Association near the Municipal Airport south of Cape Girardeau.

The property, including a small race track and fencing, was sold by separate items, then was auctioned as a lump unit.

It required 30 minutes to hold the sale.

The Dec. 5, 1967 Southeast Missourian reported the Cape Girardeau Municipal Airport Board recommended that the go-kart track be abandoned.

The track was in the construction area and was originally scheduled for landscaping in the Federal Aviation Agency's over-all plan.

After hearing a report from airport supervisors that go-karts have been a hazard to aviation at times in the past, members approved the motion unanimously.