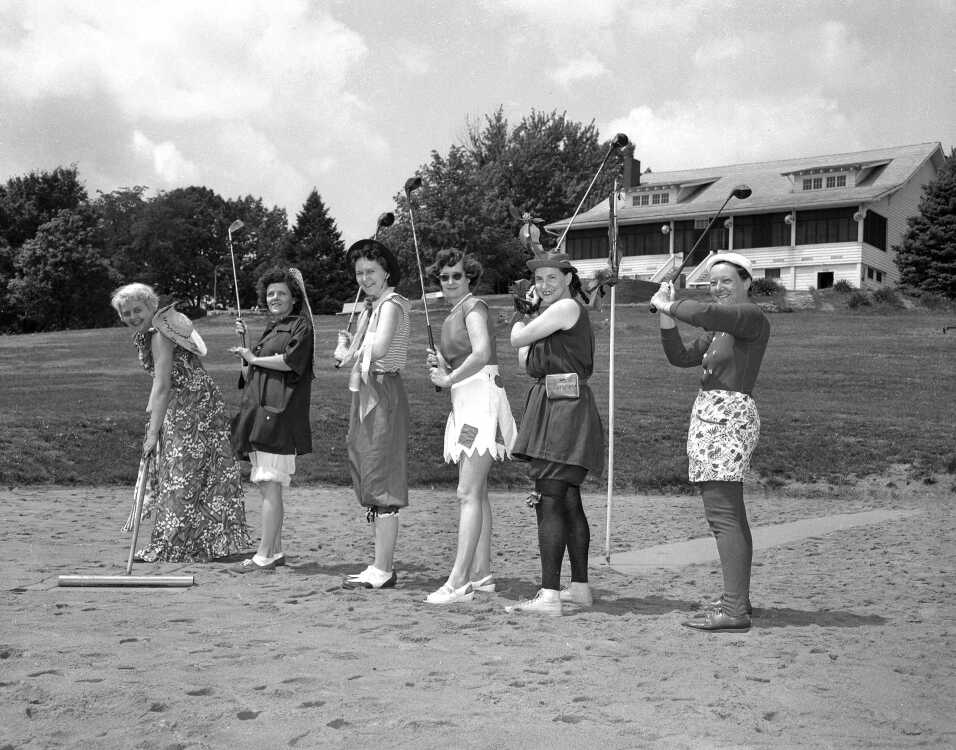 Crazy golf. That's what Country Club women called it Tuesday when they decked out in apparel of former years and held their own tournament. It looked like a Gay Nineties collection. This sextet of ladies and their garb was typical of what one saw in the tourney. From the left are Miss Antoinette Meyer, Mrs. John Gord, Mrs. James Warren, Mrs. Dean Dickerson, Mrs. Rodney Preston and Mrs. John Montgomery. (Photo by G.D. Fronabarger)

At the Cape Girardeau Country Club, Mrs. Joe Howell, president, welcomed members of the Ladies' Golf Association on its opening day of the current season Tuesday. Yearbooks were distributed.

Starting with a "Crazy Dress Parade," a highlight feature, the day's activities began at 9 a.m. and continued through the afternoon hours with a sack luncheon at noon. Mrs. Rodney T. Preston, wearing a "Country Pumpkin" dress, was awarded first prize in the parade and Mrs. Louis Stone was second in a ballet dancer costume. Following the parade was a "Crazy Golf Foursome."

The round of golf was led off by a comedy twosome of Mrs. Howard Sproat and Mrs. Richard Brown, who were dressed, and performed, as the first lady golfers did at the country club in 1904. Partners for the "Crazy Golf" were drawn from names in a hat with each member of a foursome allowed only one club with which to play nine holes. Winners were the foursome of Mrs. Preston, Mrs. John Evans, Mrs. Elmer Strom and Miss Antoinette Meyer.

Mrs. C.R. McCullough of Jackson appeared in a Moslem robe, brought from French Morocco, where she toured last summer, and Miss Meyer, who vacationed last spring for awhile in the Hawaiian Islands, wore an authentic Hawaiian costume.

Regular golf, and bridge were played during the afternoon.