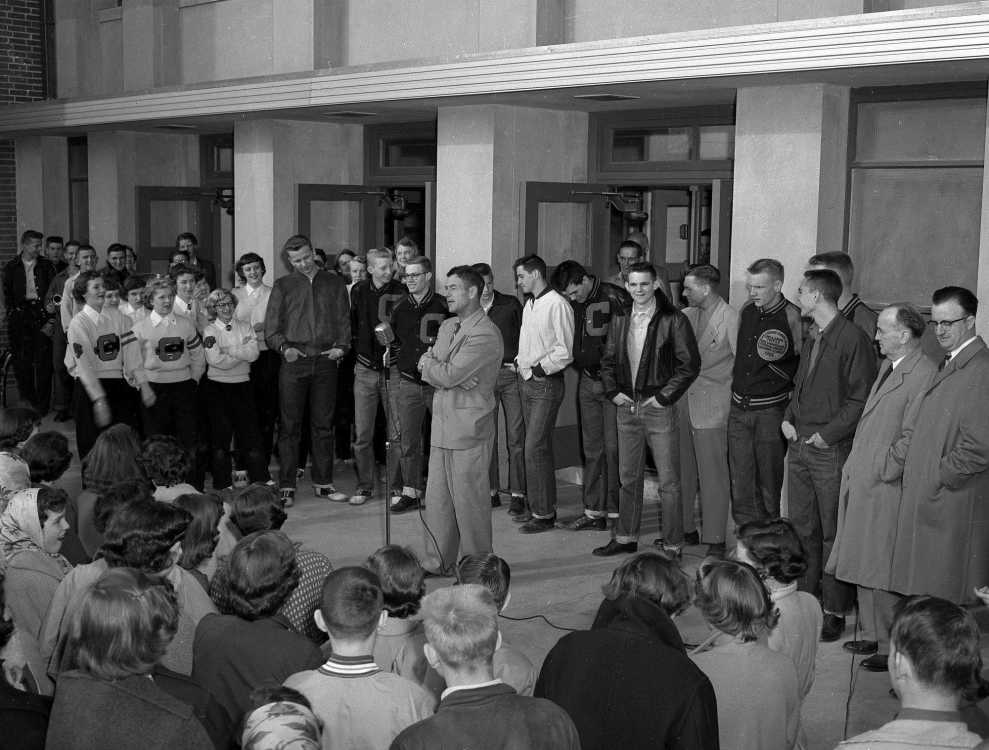 Coach Louis W. Muegge speaks to Central High School students, with his 1954 state champion Tigers basketball team behind him, following the 79-55 win over the Christian Brothers Cadets of St. Louis. It was the first state basketball title for Central. The game was played at Houck Field House on March 6, 1954. The picture was taken by G.D. Fronabarger.

Lou Muegge to step out as coach

Veteran director of team to teach

They twitted Coach Lou W. Muegge about his "annual" retirement at the Central High dinner Tuesday night, but after 27 years in a hypertensive field, there's no doubt he's quitting a winner, he will hang up his coaching armor and retire next year to the more academic phases of teaching.

It won't be official until a new school board has been organized next month, but Supt. L. J. Schultz and Coach Muegge himself confirmed it. The former declared, "Coach has pretty well decided he's going to drop out of active coaching. He's not going to retire from the teaching profession. He's still going to be over at Central."

And as he left the rostrum after expressing his thanks to everyone for everything, Coach Muegge repeated that while he is through with coaching, he will still be teaching.

There is no doubt that Muegge is the dean of southeast Missouri coaches, and Coach Kenny Knox left the thought in his talk that maybe he's the dean of high school coaches in Missouri. Twenty-seven years is a long time.

Coach Muegge came to Central in 1928, arriving in a Model T fresh out of the University of Illinois. He grinned, and tutored the Tigers for three seasons, then resigned to take a job in Pennsylvania for three years. But when the job at Central reopened, he was in fast with his application and has been here ever since, a total of 24 years as a Tiger athletic leader.

As his boss, Supt. Schultz, pointed out, evidence of his success is to be found in a crammed trophy case at Central High School. Then he cited the record.

Muegge's teams played 144 football games before he gave up the sports to concentrate on basketball and baseball. They won 98 games, lost 34 and tied 12 over the long span. In 1929 his team was undefeated and unscored on. In 1935 and 1936 they were conference champions, undefeated in the '36 campaign.

There was no conference play from 1937 to 1947. In 1942 the tigers were undefeated and unscored on and in 1947, his last year as football coach, Central was Big Eight champion.

During those years Muegge coached basketball, "but we just had fun," he recalled. Then one night in 1938 after a football game at Perryville, Grover Crites, a one-time Jackson and State College star athlete, was riding back with Muegge.

The old campaigner complained bitterly that no one wanted to meet the Tigers in football, but all wanted on the bandwagon in basketball because Central was an easy mark.

"Why don't you get serious about basketball?" Crites asked. Muegge said he took him up on the challenge. "It took a lot of fun out of it," he said, "but we weren't the door mat anymore."

Muegge started working with sophomores after he had made up his mind. That year Central won two games and lost 15, but they were moving. Two years later the Tigers played in the state tournament for the first time. Including that trip, Central has been in state play seven times since 1940, winning third in 1942 and the championship this year.

In 1945 baseball was started at Central and the Tigers have played a total of 85 games. The Muegge touch is apparent here, as in football and basketball.The Tigers won 75 games and lost 10, and have taken six championships, including second place in state play.

It's no wonder they were heaping praise on the guy his old coach, Bob Zuppke, in a telegram of congratulation read last night, called "Old Step and a Half."

Lou Muegge died July 14, 1955 at a hospital in St. Louis where he had gone for a physical examination a week earlier. He was 51. He had suffered a heart attack five months earlier while playing golf at the Country Club.

The Lou Muegge Award was established in his honor. It is given to a senior athlete at Central who best exemplifies the traits of Coach Muegge.

In 1959, a running track was constructed behind the high school with football field and named Lou Muegge Field.