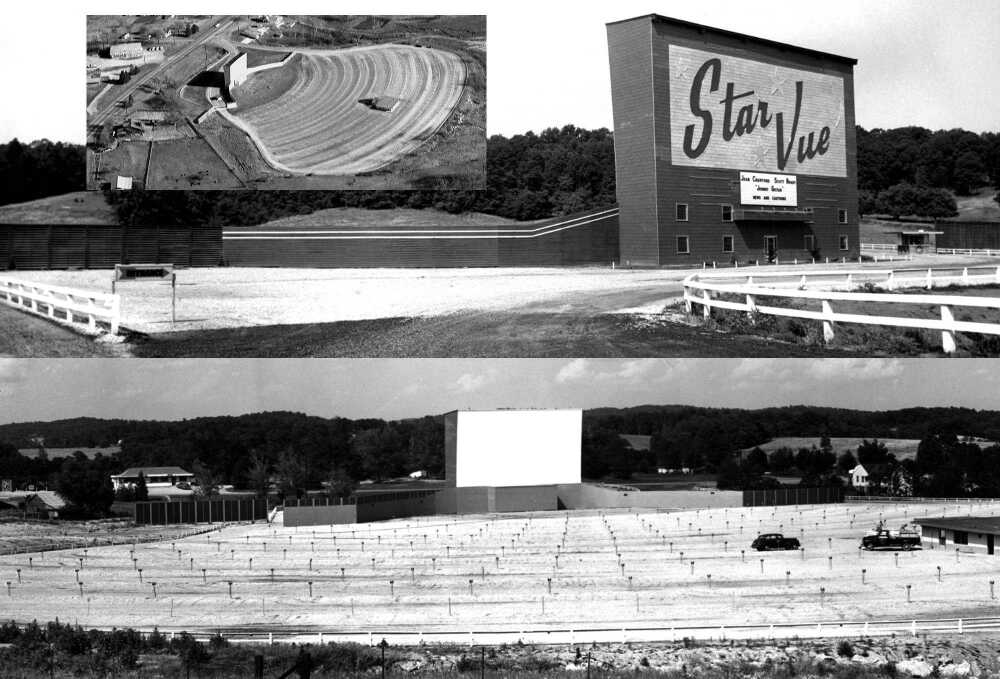 G.D. Fronabarger took these pictures of the Star Vue Drive-In Theater in Cape Girardeau in 1954. "Johnny Guitar" was playing with Joan Crawford and Scott Brady.

The theater opened on May 26, 1954. The Missourian published this story the next day:

A near-capacity crowd attended the opening of Cape Girardeau's new Star Vue Drive-In Theatre Wednesday night to see a new motion picture, "Jubilee Trail," on the giant new screen that gave it the illusion of depth near that of 3D pictures.

A number of motion picture men from St. Louis, interested in seeing the new theater, its screen and projection, were in the audience. They, as well as other first night patrons, were enthusiastic over the new outdoor movie.

Howard Bates, one of the owners, said more than 600 cars were moved out of the theater onto Highway 61 in 17 minutes after the first performance. He directed traffic, which moved both north and south without confusion or mishap.

The illusion of depth on the huge screen is caused by its double curvature which puts all sections of it equidistant from the projector and gives perfect focus. Mr. Bates noted that the picture is about a half inch in size in the projector and is 46 feet by 86 feet when it is on the screen.

It is expected that a formal program officially opening the theater will be held soon, Mr. Bates said.

An earlier story provided some details about the new theater:

Owned by the Cape Drive-In Theater, Inc., the show, widely recognized as the largest and most complete of its type in Missouri, is located on a 19.4-acre tract of the former Hillcrest Golf Club site.

The terrain, one too rugged for golfers, has been levelled in one of the biggest earth-moving projects in this section of Missouri.

Work started in November, 1952 and in the interim 92,000 yards of earth and rock were moved. On many occasions work went on around the clock.

The theater has a capacity of 714 automobiles. The screen, which is 44 feet in height and 86 feet in width, is not excelled anywhere in Missouri. The tower on which it is located is 64 feet in height, and there is space in it for 30 rooms. Of these, five on the first floor are being finished at this time for use as offices. The tower was designed by two engineers sent here by the Timber Structures Corp. of Portland, Ore., and the structural work alone cost $50,000. The screen is designed to show any type picture.

A stage 14 by 42 feet has been arranged for use on special civic occasions, such as for sunrise religious services.

The projection room is located 390 feet from the screen as are the concession quarters. The neon sign in front, the largest between St. Louis and Memphis, Tenn., is mounted in a panel 33 by 76 feet in size.

To be actively in charge of the new theaters will be Howard O. Bates, Carl A. Milne and Wm. O. Hypes, who with Andrew Kadlez of St. Louis make up the stockholders in the corporation.

They also own the Cape Drive-In Theater on Highway 61 and will continue its operation.

The Cape Drive-In Theater was on south Highway 61, north of the Cape Girardeau airport. It opened Aug. 12, 1949 with the movie "Red River." The show had a capacity of 500 automobiles. Adult admission was 50 cents with children under age 12 free.

Formal opening of Star Vue Drive-In Theater; more than 600 automobiles were parked on the grounds.

The Revs. Elmer A. Kettner and O.A. Waech, both of St. Louis, are speakers for Easter sunrise services sponsored by the Lutheran churches of this area; Kettner preaches the sermon at the service conducted at the Park View Drive-in Theater at Jackson, while Waech speaks at the service held at the Star Vue Drive-in Theater on Highway 61 near Cape Girardeau.

The Bloomer Amusement Co. Inc., of Belleville, Ill., operators of a number of indoor and outdoor theaters in Illinois and Missouri, has purchased and taken over management of the Star Vue and Cape Drive-In theaters here.

Easter sunrise services are conducted at both the Star-Vue and Parkview drive-in theaters, sponsored as community services by the Lutheran churches of Southeast Missouri; the Rev. H.H. Koppelmann of St. Louis speaks on "Easter: Its Joys and Obligations" at the Star-Vue, while the Rev. Frederick Niedner of St. Charles preaches on "That Which Has Lived and Died Can Live Again" at the Parkview.

By June 1973, the Star Vue was owned by Kerasotes Theaters.

Purchase of Star Vue Drive-In Theater property on North Kingshighway from Kerasotes Theaters Inc. is announced by Narvol A. Randol; Randol says property was acquired for long-range investment but at present has no plans for his development; theater was developed by late Howard Bates in early 1940s; Kerasotes closed theater for winter season last Oct. 1 and did not reopen this spring.